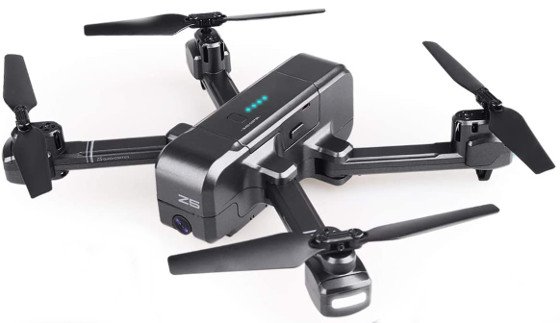 The SJRC Z5 is a decent foldable drone that comes with a 1080p HD camera that can be remote adjusted 90°. It’s a very light drone, so not really a suitable drone to fly in any kind of windy conditions. Other features it comes with include dual GPS, smart flight modes, automatic return to home and gesture control mode. Its has a flight time of 15 minutes and is an overall fun drone to fly.

Hi and welcome to my review of the SJRC Z5 drone.

The SJRC Z5 was released a couple of years ago, so in the fast-growing world of drones, it’s quite an old drone.

Drones are very fun to fly, especially the ones that come with a camera like the SJRC Z5 does, which is probably the reason most people purchase a drone and why you are looking to buy one.

Although SJRC Z5 is a decent drone and one that comes with some very nice features, I personally believe there are better drones at similar price points.

Carry on reading the full review of the SJRC Z5 drone to see what features it comes with and if it’s worth the price.

So, if you are a regular reader of my blog (and I hope you are!!), you may notice that this drone looks very similar to some other drones that I have reviewed, for example, the Snaptain SP510 and the Holy Stone HS270. 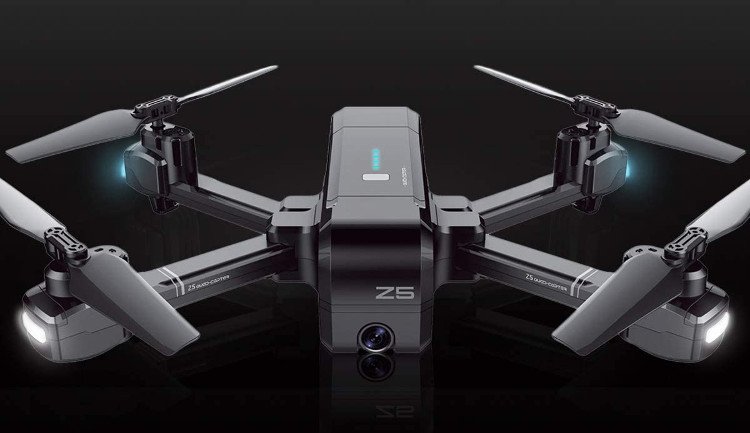 Not only are they similar in looks but they also come with similar features, the SJRC Z5 is a foldable drone, which is my favourite type of drone. This is because foldable drones are usually lighter than most other drones and they are very compact in their folded form which makes them great to travel with.

However, there is a design element of the SJRC Z5 that I am not a huge fan of and that is its main body which is a bit too bulky for my tastes. That is just my personal preference, I prefer foldable drones that are slimmer as I believe they just look better. For example, check out the DJI Mavic Mini or the MJX Bugs 7, both are good examples of stunningly designed foldable drones.

One of the cool things about this drone is that it is very lightweight, it weighs less than 250g, which is important if you live in the UK, Canada or the USA as it means you will not need to register the drone. 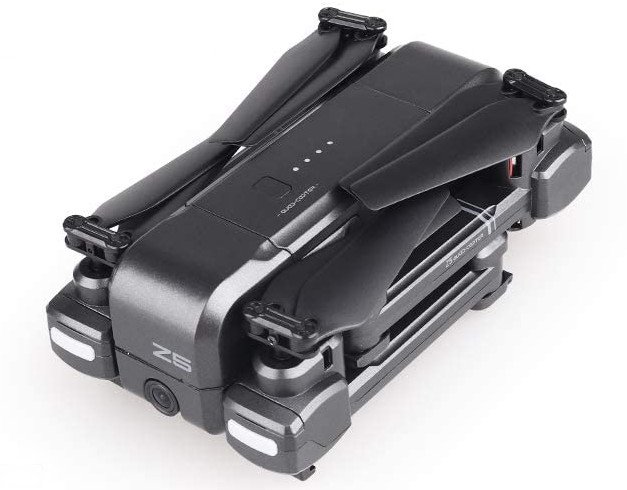 If you live anywhere else, as far as I am aware, you will not need to register a drone regardless of its weight, if you are planning to just fly for fun. However, please still check what the rules are wherever you live just to make sure you are complying with the law.

One of the not so cool features is the drone comes with brushed motors, which is quite disappointing seeing that there are many drones in its price range that comes with the far more powerful and efficient brushless motors.

This also means you will have to be extra careful if you want to fly in any kind of windy conditions and something you should only do if you are an experienced drone pilot.

Like a lot of modern consumer drones, the SJRC Z5 has LED lights on the end of each rotor arm. These serve a couple of purposes, they will indicate when the drone compass has been fully calibrated and also flash in certain ways when there is a problem with the drone.

You can find out what the problem is by referring back to the manual.

One other cool thing about these LED lights is that they create quite a spectacle if you in dark areas.

The drone does come with dual GPS system which means better flight stability and more accurate flight positioning on the app. Its GPS system also allows for the drone’s autonomous flight modes which I will explain further down this review.

The drone is powered by a 7.4v 1200 mAh LiPo modular battery, this is a nice-looking modern battery that fits on top of the drone and has few LED lights that indicate its power level. The battery provides the drone with around 15 minutes of flight time, which is a decent flight time for a drone that costs under $200.

However, if you would like to extend the flight time and not have to wait the few hours it takes to recharge the battery, I highly recommend you purchase a couple of extra batteries.

There is a micro SD card slot on the bottom of the drone that will allow you to record video footage in the highest resolution the camera will allow, in this case, it is in 1080p. Unfortunately, it does not come with a memory card, so you will need to purchase one yourself.

A feature of this drone I like is its remote controller which reminds me of the DJI Mavic controller. It has a minimalist design, is powered by an internal LiPo battery and has a range of around 500 meters.

There is a smartphone holder that pulls out from the middle and a pair of handles that fold out from the bottom, these handles may provide a better grip for some people, but they are not needed.

It comes with all the standard buttons and they are clearly marked so you know what each button does.

To use the drones FPV feature and its smart flight modes, you will need to download the official app which is called the SJ GPS Pro and is available on both Google Play Store and the Apple App Store.

This is a pretty decent drone app and although it hasn’t been updated in a while, it doesn’t have any major problems like many of the other apps from smaller drone brands. 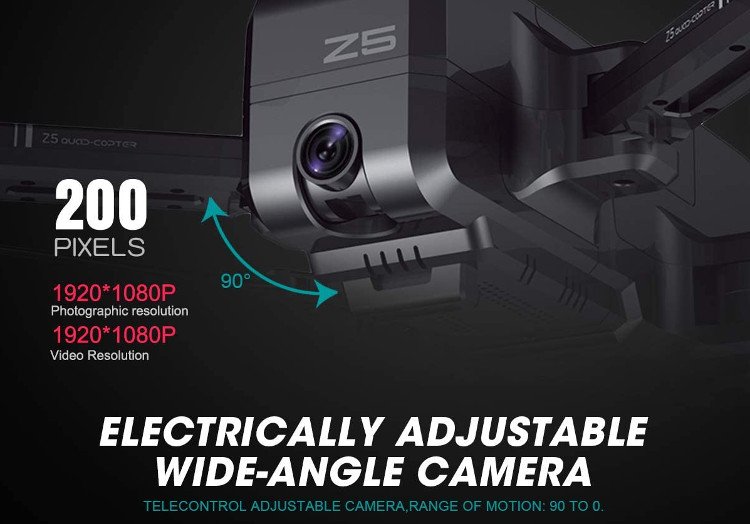 So, one of my favourite features of this drone is its camera, now don’t be fooled by its product page, this is not a professional camera and you will not be winning any photography prizes with this drone.

However, it is a decent camera that has a wide-angle lens and you can adjust the angle 90° up or down via the remote controller.

It has no gimbal or electronic image stabilisation feature, so you may notice some distortion, but this shouldn’t really be an issue since you will be not be using these videos or photos for any kind of commercial reasons.

You can stream live video footage in 720p, this is also of decent quality but the range for the FPV is only around 100 meters, so you will have to keep the drone well within this range to get the best live video streaming quality.

Overall, it’s a nice camera, but as it costs just under $200, I believe there are better quality drones at similar price points like the MJX Bugs B7 or the Hubsan Zino 4k (which is a little more expensive but the camera is worth it).

One of the best features of the SJRC Z5 is the smart or intelligent flight modes it comes with. These flight modes only work with a strong GPS signal and are accessed via the app.

The smart flight modes are fun to fly and usually work but sometimes if the app is playing up or if the GPS signal is too weak, they may not operate properly.

The SJRC Z5 comes with the following smart flight modes:

Waypoint – In this flight mode, you can draw a path on the app and the drone will fly along the flight path automatically.

One of the best parts of these flight modes is that you have full control over the camera and so you can concentrate on taking some cool videos and photos without having to control the drone. 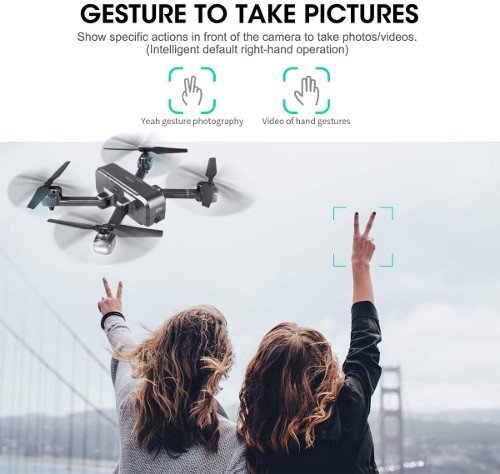 Some other cool features include gesture control mode which will allow you to shoot videos and photos through hand gesture. It also has an automatic return to home feature, you can activate this via the remote controller or the app and it will be automatically activated if you lose connection with the drone or if the battery gets low on charge.

This is an easy to fly drone which makes it suitable for everyone, even beginners. It is a very light drone, so I wouldn’t advise anyone to fly it in windy conditions unless you are an experienced drone pilot. The transmission range is around 400-500 meters on a good clear day, but I don’t think you will be flying that far out with this type of drone. Most of the features work as they should, you may sometimes have problems with the smart flight modes, but this is usually if you have a really old smartphone.

This is a good foldable drone, its fun to fly, comes with some decent features including a good camera, dual GPS and smart flight modes. To find out more details click on the button below. If you want some better alternatives, I highly recommend either the Bugs B7 or the Hubsan Zino 4k.