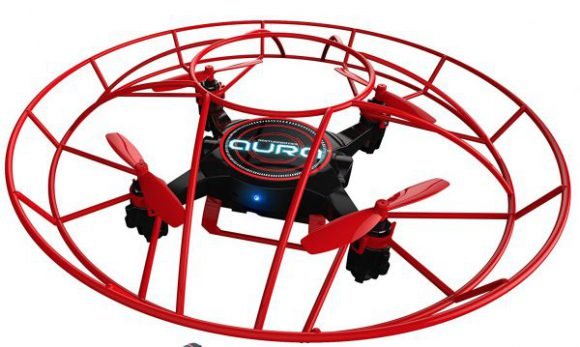 The Aura drone with glove controller is a drone that everyone will want to play with. Its targeted for kids but because of the unique way it is controlled even adults will want to have a quick play around with it. It’s a simple drone that is mainly for indoor flight. Its ‘gesturebotics’ controller is the main attraction and with it you will feel like a superhero. A great drone for beginners and kids.

Welcome to my review of the Aura glove controlled drone,yes this drone is controlled solely by a controller attached to your hand, geeky dreams can come true!!

How many of us have watched the Star Wars movies and cartoons with wizards and fairies and wished we could control things with the gesture of our hands? Well with aura glove controlled drones,our wishes have just come true.

The fast moving world of drones never ceases to amaze me with the technological advances it makes and with the Aura drone it has me drooling.

While the Aura glove controlled drone is targeted towards kids, make no mistake about it,adults will have a hell of a time flying this geeky drone.

Seen the Iron man movies? How cool does Tony Stark look when he is working and moving those holograms with the gesture of his hands? Flying the Aura drone will make you feel like you have super powers!!

While there are other toy drones that have gesture control features,they are not truly hands-free because they still require a remote control.

With the Aura drone, the glove controller feels like a part of your hand giving you special powers.

So without geeking out any further, let’s get on with this review of the Aura drone.

Inside the box, you get the Aura drone with a protective frame,a black stretchable glove with a controller,2 LiPo rechargeable batteries and an extra set of propellers.

The drone is lightweight as you would expect with a drone that is made specifically for kids and has a plastic frame that covers the body that makes it crash resistant and protects. There is an LED light on the front for easier orientation when in flight.

The batteries are located underneath the main body and they are secured by the landing gear and are removable. Having removable batteries means you can buy an extra set and alternate between them when one runs out of juice.

There is also no on and off switch on the drone,instead you will have to connect the battery to a wire that connected to the drone.

Its not going to win any design awards but then again you will not be purchasing it for its aesthetics. 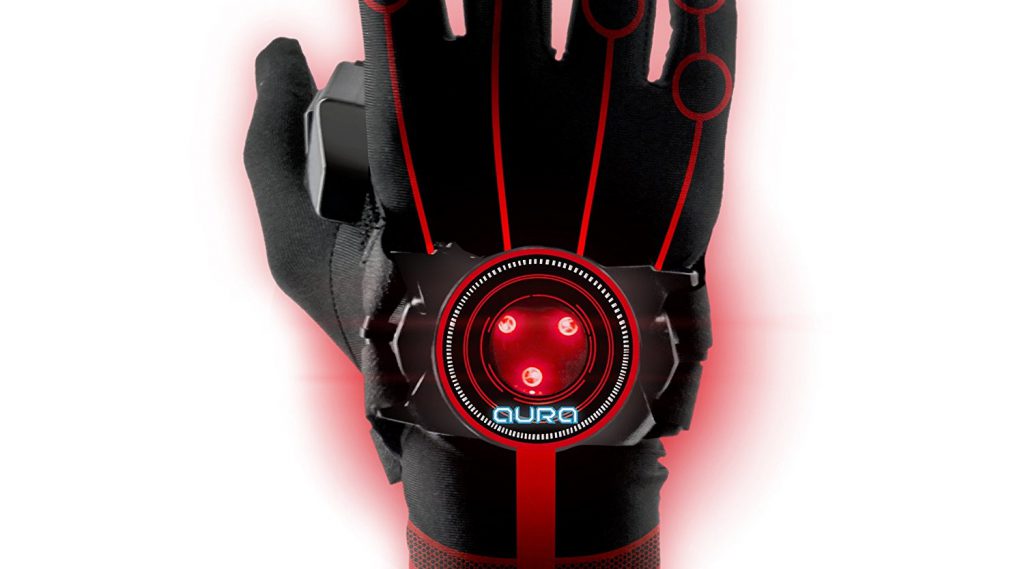 The actual controller has a circular interface with a switch for turning it on and off and a button for taking off and landing.

It is attached to your hand by two Velcro straps ensuring a tight fit and there is a button on the left strap for extra functionality. The controller has 3 LED lights that turns different colours when the drone is in different flight modes.

The stretchable glove fits all size of hands,you do not require it to fly the drone but it does look way cooler if you do.

To turn the drone on you will need to connect a wire coming out of the body to a connector on the battery.That is probably one of the downsides of this toy drone,there is no on and off switch but it is not a huge deal.

When the controller is turned on,the LED lights will start flashing and when they turn green,it means that there is a connection with the Aura drone.

Flying the Aura drone does require a bit of practice and you may see yourself crash a few times. Fortunately, the drone is built to withstand these crashes.

The drone takes off as soon as you press the take-off button, and this is where you will be able to test your Jedi skills.

Apparently, the technology behind this drone was previously only available to the military,I don’t know how true this is and if it is just a marketing ploy,it is still the first consumer drone to be controlled this way. The brains behind the Aura drone is Dr Pramod Abichandani, who named this fascinating way of controlling the drone ‘gesturebotics’.

Manoeuvring the drone is pretty straight forward,moving the drone forward and backwards is simply a case of bending your hand downwards or upwards. Going left or right is done through a simple gesture in that direction.

To go up or down, press the button on the left strap and move your hand accordingly. The drone can also do some nifty 360° flips by holding pressing the button while flicking your wrist.

Trust me,flying this drone will make you feel like a kid again and pretending to have control over the force is super fun. If you buy it as a present for your kid/nephew etc you may end up playing around with it more than them.!!

As this is a toy drone flight times are short. Well for me they are short,maybe some kids will get bored after 5 minutes but I doubt it. The drone comes with 2 lipo rechargeable batteries but as I have mentioned in other articles,you should always look to purchase extra batteries because flight time is one of the areas that drone manufacturers need to improve,even on the more sophisticated drones,the maximum flight time is around 30 minutes.

Check out the video below to see how you control the drone.

Being that the Aura drone is targeted towards kids and young teenagers it has some built-in safety features. It has a limit to how high and far away it can fly so the chances of you losing it or crashing it are minimised.

It has a safety frame around the propellers thus protecting any little fingers that may want to grab it while in mid-flight and it has an auto take-off and landing button.

This is a drone made for kids but one that everyone will want to play around with. It’s a unique drone that is different from what you would expect from a toy drone or any drone for that matter. It has no camera and its controller looks like some kind of toy watch. Despite this its unique ‘gesturebotics’ feature will allow you to control the drone through mere hand movement and will have you feeling like you are Obi wan,Yoda or whoever your favourite star wars character is.

A couple of things to be aware of,it’s a very light drone and great for indoor flight but not outdoors. Also,I have mentioned this,but I will mention it again,it has a short flight time so purchase some extra batteries if you do buy the drone.

May the force be with you.