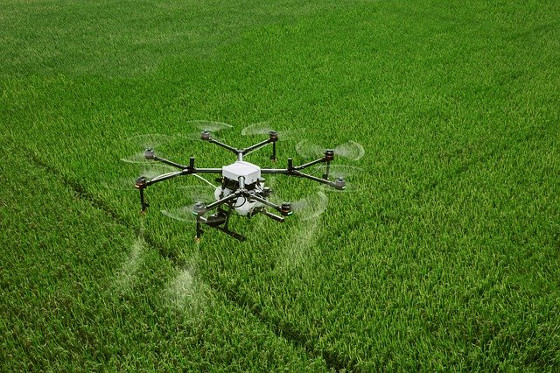 Drone technology is being increasingly used in the agricultural industry, from crop scouting to mapping fields, drones are helping farmers, agronomists, crop insurers and other interested parties collect and analyse data quickly and efficiently. This leads to better informed decision making when it comes to field operations such as the application of pesticides, fertilisers, irrigation, crop count and estimating crop yield. Drones for spraying crops is an area where drone technology is starting to show great potential and is having a huge impact in many places and proving to be the better option to the traditional methods of crop spraying.

Despite the use of smart technology in many areas of agriculture, farming is still very labour intensive and time consuming. However, by utilising drone technology, many aspects of farming operations are now made much easier and more time efficient.

Using drones for spraying crops is still a new thing, but it is picking up some steam. Due to the limited availability of drones for crop spraying and local regulations, the agriculture industry has been slow to adopt this technology However with many countries like China and the USA as well as the EU relaxing drone laws, crop spraying drones will start to be utilised more and more widely.

There are a number of benefits of using drones for spraying crops, one of the most important is they are proving to be a safer way to apply chemicals than methods like using backpacks and manned aircraft.

As I stated near the beginning, many aspects of farming are still very labour intensive and spraying chemicals manually is tough work and can be harmful and is definitely not time efficient.

Utilising drone technology to spray crops eliminates any harmful effects that chemicals may have on humans and as they are easily deployable, it’s a much faster and efficient use of resources.

Drones for crop spraying can be operated by one or two people, they are easy to operate and with autonomous flight modes and automated spray application, it’s much safer and requires little manual labour.

Another benefit of using drones for crop spraying is that they are being used to spray in areas that are difficult to reach by land. For example, according to this BBC article, farmers in El Salvador are treating crops like Sugar Cane for the first time thanks to drone technology.

With the aid of photogrammetry software like Pix4DFields or DroneDeploy, farmers and agronomists can upload prescription maps and make sure that the drones only spray areas that need to be treated.

While there are a number of capable crop-spraying drones, there are two companies that dominate in this area. 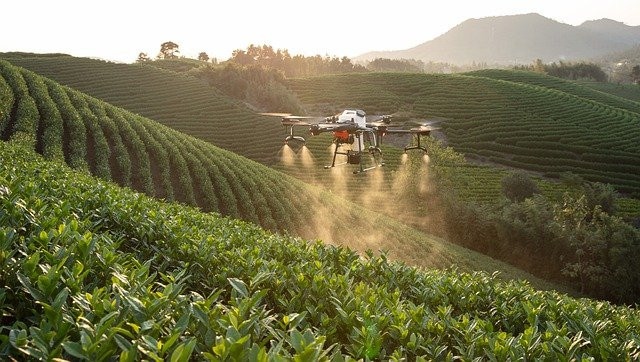 DJI is one of these companies, and although they are known for their high-end consumer drones, they also manufacture some of the best commercial drones, which includes the Agras range of crop spraying drones.

The DJI Agras drones come with a range of advanced features which will help farmers spray their crops in a fast, efficient and safe manner.

The latest drone in the DJI Agras series is the T30, it comes with a massive 30L tank, which is the largest in the Agras series and can also be fixed with a 40L spreading system. The T30 comes with an advanced spraying system that includes an improved plunger pump design, 16 optimally placed nozzles and adjustable arms for optimal coverage.

The spray system has been designed to reduce drift so that it only sprays on plants that need to be treated, this will reduce the use of harmful chemicals, minimise waste and help save money.

The Agras T30 can spray 8L per minute and has a spray width of 9 meters which will allow farmers to cover 40 acres of land in an hour. It comes with a new smart gauge that indicates when the tank needs a refill and is powered by a smart battery that can be fully charged in 10 minutes and provides 1000 charging cycles, which is enough battery life to spray around 4900 acres of land.

Its design allows it to be reduced in size by 80%, which makes it portable and easier to travel with and It comes with an IP67 rating that allows it to be used in harsh weather conditions.

The DJI Agras T30 comes with a host of features for safer flying missions, this crop spraying drone is installed with a spherical radar system that allows it to be completely aware of its surrounding. Along with its omnidirectional obstacle avoidance system, the drone can safely navigate its way through any terrain and make automatic detours if needed.

The drone comes with a front and rear FPV camera for improved awareness during flight operations and has a bright searchlight that can be used for night time operations. Its remote controller has a large 5.5-inch LCD screen that will allow you to monitor operations and has a control range of 5km.

The remote controller can also be used to control multiple drones, allowing for better productivity and efficiency.

The other drones in the Agras range include the T20, T16 and T10, the major difference being their tank capacity and how many acres they can cover within a certain time limit.

Other than that, most of them come with similar features this includes an IP67 rating that makes them resistant to water and dust, RTK module for precise flying operations, powerful spray system, spherical radar and obstacle avoidance system.

DJI have another range of drones for crop spraying, they are the MG-1S and MG-1P, while they may not be technologically as advanced as the Agras series of drones, they are more suitable for smaller crop spraying missions.

XAG is the other company that is leading the way in utilising drone technology for use in agriculture, especially in the area of crop spraying. Unlike DJI, XAG specialise in developing smart products for the agricultural industry which may give them an advantage over other drone manufacturers.

They have a range of drones for crop spraying with different payload capacities and flight times.

The drones are built from a combination of carbon fibre and aluminium alloy and have a modular design making them easy to maintain.

Most of these drones come with an IP67 or IP65 rating that allows them to be flown in harsh weather conditions and with an advanced radar and obstacle avoidance system, they can be flown over any type of terrain.

All XAG crop spraying drones are fitted with smart tanks that can sense the density and volume of the liquid inside, which allows the drone to adjust its spray action based on its speed and elevation.

Currently, XAG has 4 drones with spraying capability, they are the XPlanet Agricultural, XAG P30, XAG P30 and XAG P10.

Deere & Company better known by their brand name, John Deere (also the name of the founder) are a USA based corporation that manufacturers machinery for the agricultural sector.

They have partnered with the German drone company, Volocopter, and customised their large multi-purpose Volodrone for agricultural use. It’s a huge drone that has 18 rotors and has the capacity to carry 200kg worth of payloads.

The drone is equipped with a flexible attachment frame that allows it to carry different types of payloads and in this case, the Volodrone has been attached with two large liquid carrying tanks and a spray bar.

It has a flight time of 30 minutes and can cover 15 acres of land in one hour, however, unlike the other crop spraying drones, this one is not in mass production due to its sheer size and cost.

They do have a smaller drone that carries a 10.6L tank, that has 30 minutes of flight time and can be automatically refilled and recharged via a mobile station.

Drones are a great way to increase the efficiency of crop spraying, they provide a safe and exciting way to protect crops from disease and pests, whilst keeping costs down and improving overall ROI. They also help protect the environment by reducing the use of chemical products and as they are powered by batteries, they also help reduce your carbon footprint.