If you are in the market for a cheap HD camera drone, the Eachine E520S is the drone you are looking for. This a well-designed foldable drone that weighs less than 300g and comes with some good features, the best of which is its HD camera. With it you will be able to take some decent aerial video footage and images, it also comes with GPS for a more stable flying experience and 3 intelligent flight modes that will wow family and friends. A great drone that everyone will have fun flying. One thing I have to mention, one the product page you will see this drone advertisied as 4K, its not really 4K drone, it can take images in that resolution bit not record video footage which is what people will automatically think. If you are intersted in an affordable 4K drone, check out my article for the best drones under $500

Welcome to my review of the Eachine E520S camera drone, the latest budget friendly drone from Eachine who have released several high-quality beginner friendly drones at affordable prices.

As regular readers of this drone review site may know, one of the main reasons I love camera drones so much is because they allow you to see the world from above and experience things you may not have otherwise.

As the market for budget friendly drones grow, so does the competition among smaller drone manufacturers to deliver feature rich drones with high quality cameras at low prices.

One of these companies that have risen to the challenge is Eachine, I have already reviewed a couple of their drones like the E58 and E511S.

Eachine are becoming a household name in the world of budget friendly drones, they have released some fantastic drones at affordable prices and the Eachine E520S is no different.

What you first notice about the Eachine E520S is that it is a foldable drone and looks very similar to that of the DJI Mavic Air. I do not believe this is by accident, the Mavic range of drones are one of the most popular and there has been a plethora of copycat models that have followed and tried to emulate some of its huge success. Most of them have not been that impressive but some have and one those is the Eachine E520S. 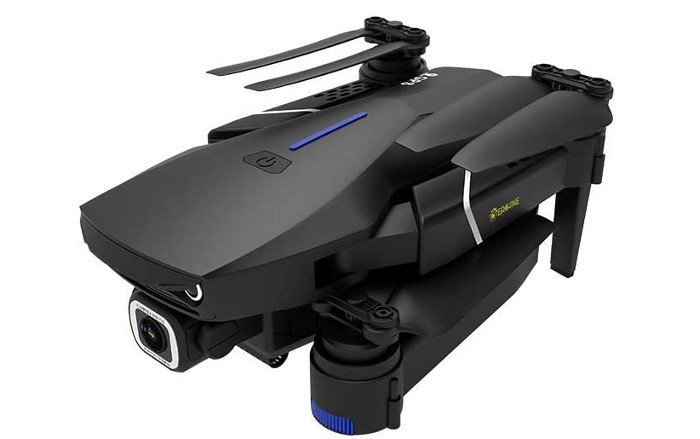 The Eachine E520S is built from high-quality plastic that is durable and doesn’t feel cheap. It’s not one of those drones that feels like they will fall apart as soon as you encounter your first crash, it also comes with propeller guards to minimise any damage from any crashes ( and if you are a beginner, you most likely will crash your drone a few times).

The drone measures 40*28*7.5 cm with its arm fully expanded and with the propeller guards attached. When its folded it becomes half the size and this makes it great for travelling around with, in fact, if you are a frequent traveller and looking for a good travel drone, foldable drones like the Eachine E520S are perfect to take on your travels. 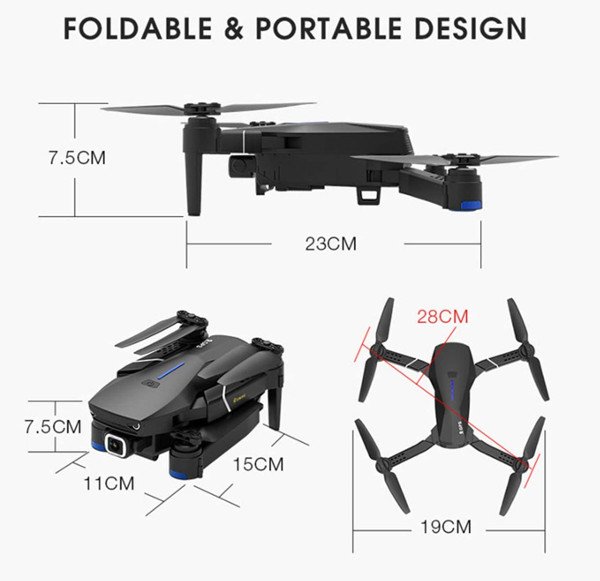 The drone comes with a 1200 mAh lipo battery, these are the new types of modular batteries that store charge for much longer. On one battery charge, you can fly the drone for around 15 minutes which is longer than most other drones in its price range.

One last thing I want to mention before I get on to the main features of this drone is its remote controller.

It looks modern and comfortable to hold, there are some drone controllers in the price range of the Eachine E520S that are big and clunky and aesthetically not very appealing. This is not the case with this controller, it has a transmission range of around 300m and if you use the FPV feature you can stream video footage from a maximum range 250m.

This is a decent drone, but if you want more options around the same price range, click on the button below. 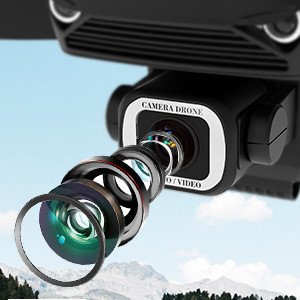 When you see the image above, you straight away think this drone can record video footage in 4k and if that were the case, it would be an absolute bargain. However, it is misleading because the drone can only shoot images in 4k while video footage is recorded in 1080p.

For the price this drone sells for, you really can’t expect 4k video footage but that doesn’t excuse them from misleading advertisement. It still is a decent camera and you can take some nice video footage and aerial images, as the drone doe snot have any kind of stabilisation feature (since it is very a very cheap drone), you will see some distortion like jello effect and shakiness.

The camera has a 120° FOV, this will give you a wide-angle to record and capture aerial videos and images and you can adjust the camera 90° to get the viewing angles you want.

You will not be winning any photography prices with this drone and it’s not designed for that purpose (despite what it may say on its product page), its an overall good camera that you can enjoy while out and about.

However, if you are looking for an affordable high-quality camera drone, check out my article for the best drones under $500, most of these drones are 4K and they will allow you to shoot professional videos and images.

Like many modern drones, the Eachine E520S comes with several intelligent flight modes. These modes make it easier for anyone to fly this drone and taking videos and images is made much simpler as you do not have to worry about controlling the drone.

It has three intelligent flight modes, they are;

Waypoint – Draw a path on the app and the drone will follow that path automatically.

Surround/Orbit – In this mode, the drone will orbit the person holding the transmitter, this mode is great for taking selfies with.

Smart Track – With this mode the drone will lock on to you and follow you wherever you go, this is another great way to take videos and images handsfree.

The drone also has an automatic return home function, if you see the battery charge start to drain or lose sight of your drone, just press the RTH button on the controller and the drone will return to you. A cool feature that will minimise the chances of you losing or crashing your drone.

Flight performance for the Eachine E520S is pretty good, it’s stable and even in windy conditions, it’s not that hard to control, although there is a bit of interference if you are using the FPV functions. As it comes with GPS, you can hover the drone without any problems and GPS also allows you to take better images and videos. There are three-speed modes, it’s a fast drone even on the lowest speed mode, so only switch to the faster modes once you become a more experienced flyer.

As I mentioned earlier, the drone comes with a 1200 mAh lipo battery which gives it a flight time of around 15-16 minutes, for a drone that cost just over $100, this is better than most other drones in this price range.

However, it’s still not long enough to fully enjoy the drone flying experience and hence why I always advise people to purchase extra batteries. Fortunately, Eachine does offer a package that comes with three extra batteries which will stop you from having to purchase them separately and save you money.

The Eachine E520S is a good drone that comes with some cool features, an HD camera and is very easy to fly. This drone costs just a little over $100 and is great for beginners and experienced drone pilots.

My personal favourite drone around this price range is the DJI Tello drone, its great for beginners, comes with some awesome features and it has a better camera with a good electronic stabilisation feature. Click here to check out details for the DJI Tello drone or click on the button below for more information on the Eachine E520S.