The Future of Drones – 5 Areas To Watch 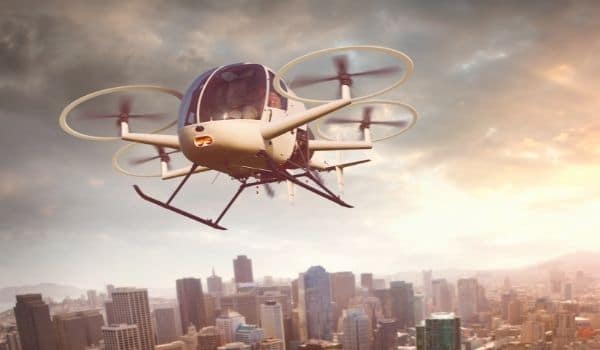 “What will the future of drones look like?” You may ask. The short answer is: we have no idea! But what can be said with certainty is that we are currently witnessing a fascinating time in drone history. There are so many different ways to use these devices, and they’re getting smarter all the time.

The future looks bright for commercial drone use and this article will tell you the 5 ways that drone technology will be used more frequently. Read on to learn more about this incredible technology that’s changing our world.

What Is The Future Of Drones?

Drones are quickly becoming an integral part of society. In fact, in the past few years, they’ve helped people fight fires, locate missing people and even assist with environmental conservation efforts. With a wide range of innovations and new features on the horizon, it’s safe to say that drones will be put to use in many new ways.

The use of drones for delivery is still in its infancy and there are still many hurdles to overcome before it becomes commonplace. However, there are some companies that have been using this technology to great success. Amazon made headlines in 2013 when their then CEO Jeff Bezos announced plans for their drone delivery program through Amazon Prime Air. Although their plans have somewhat stalled, there are many companies that are providing drone deliveries with great success.

There are many benefits that come with using drones for delivery, especially in emergency situations where getting vital supplies delivered by traditional methods may not be the most time-efficient. Companies that are integrating drones in their logistics chain are offering same-day delivery, especially for things like medicine, medical equipment, groceries and takeaway food. China is leading the way in drone deliveries, companies like JD.com, Alibaba, Meituan and a host of others have already built many drone delivery networks and many of their drones are able to deliver heavy cargo weighing hundreds of KG.

Drones deliveries are not as advanced in the west but they are slowly making progress as technology advances and regulation is relaxed. Google’s parent company Alphabet have a drone delivery division called Wing and they have been making great progress in Australia where they have made over 100,000 drone deliveries in the last few years and have partnered with some major retailers for same-day drone delivery.

One of the main areas where drone delivery has been hugely beneficial is delivering vital supplies like medicine and medical equipment in remote areas where traditional methods of delivery by road are difficult.

One of the leading companies in medical drone delivery is Zipline, a US-based startup that has a significant presence in Rwanda where it delivers vital medical supplies all over the country. Drones have also been used to deliver the covid vaccine to rural communities all around the world.

This is the one I am most excited about, the dream of operating an aerial vehicle totally autonomously is already here, although, it may be a few years before you will be able to fly off in your own taxi/passenger drone.

Passenger drones will play a huge role in the emerging urban air mobility (UAM) industry that will revolutionise the way we move around in urban areas. This is projected to be a billion-dollar industry and already there are some big aerospace companies such as Boeing and Airbus that have plans to release their own fully autonomous passenger drones.

However, at the moment there are only 3 companies that have made any real progress in this area, they are Volocopter, Ehang and Joby Aviation

Founded in 2011, Volocopter is a German-based aerospace company that hopes to lead the UAM industry through its innovative eVTOL drones and associated products. Currently, they have developed 2 passenger drones for air mobility and one for drone delivery. The two-passenger drones are the VoloCity, which is a 2 passenger drone, that has a range of 35 km and a speed of 110km. The VoloConnect, has a longer range and faster speed and can carry up to 4 passengers.

Test flights are already taking place in many countries including Singapore, Dubai, Germany and Italy.

Ehang is the other aerospace company that has made some major strides for UAM vehicles. Their Ehang 216 passenger drone is fully autonomous with full redundancy and has made many successful test flights. It’s a 2 person passenger drone, has a range of 35 km and a top speed of 130 km, the Ehang 216 has so far been tested in China, Indonesia, Dubai, Estonia, Spain and Japan and will be looking to expand into more countries.

The final company I want to mention is Joby Aviation, founded in 2009 and going public in 2021, this company has received some huge funding from major brands such as Toyota, Intel, and Uber. Their eVTOL is an impressive vehicle, it can seat 4 passengers plus the pilot, has a maximum range of 150 miles and has a top speed of 200 mph.

From search and rescue operations to managing disaster areas, drone technology is being utilised more and more for public safety operations. One area where drones are making a significant impact is in search and rescue missions. Drones are cheaper and more flexible than using manned aircraft and come with many benefits for search and rescue missions such as being deployed faster, being able to manoeuvre into narrow areas, being equipped with professional sensing equipment and being easy to operate. Drones are also being utilised in disaster management, they can easily map a huge area pretty quickly allowing interested parties like first responders, law enforcement and clean up crews a highly detailed birds-eye view of the area which will allow them to make informed decisions on how to proceed and work more efficiently. DJI keep an interactive map of incidents where drones have been used to help people, you can find it here and although it is not an exhaustive list as not everyone knows or will report about a drone related rescue mission, it does show that drones are being widely used in emergency situations.

Drones are already being used by law enforcement, private security firms and even private individuals to help with security and surveillance. These unmanned aerial vehicles (UAVs) are being used by law enforcement as a tool for gathering information, which could be helpful in high-crime areas. Drones can also be used to monitor crowds on the ground for illegal activities or threats. For instance, at large concerts or protests, police keep a close eye on the crowd from above with drones. This allows them to detect any criminal activity without putting their lives in danger.

Drones can be used to secure and survey sensitive areas, construction sites, airports, seaports and other areas of high importance. Drones used for this purpose are deployed automatically either through a trigger or at scheduled times. Security personnel will have access to the live video feed and can take quick and decisive action if an issue is identified.

Many security drones such as those manufactured by Easy Aerial can be tethered to a mobile ground station and provide 24-hour surveillance, as they are mobile, these ground stations can be easily moved to areas with security vulnerabilities.

There are many benefits that come with using drone technology for security purposes, some of these include regularly scheduled patrols, tracking intruders and alerting security personnel, saving labour costs, attached with advanced remote sensing technology and reducing risks to staff.

Drones For Agricultural Use

The future of drones for agricultural use is very exciting, drone technology for precision farming has been adopted in many countries and is showing some great results.

Drones have been utilized for a variety of agricultural applications. From monitoring crop health & growth to locating and mapping out irrigation systems. There are drones for crop spraying which provides added benefits, and some are even equipped with spreaders that will allow farmers to plant seeds and spread mulch more accurately. These types of drones are slowly beginning to be adopted by more and more farmers, although in China, they are more widely in use and benefits are already evident.

As these drones are fully autonomous, they are more easily deployable, farmers can regularly check the health of their crops, spot pest infection and disease much quicker and take the necessary steps to remedy these issues as soon as possible.

Many drones have been specifically designed for precision agriculture, they either come with or can be fitted with different types of sensors that will allow farmers to capture different types of plant and soil data and identify down to centimetre level where an issue lies. Capturing accurate data will help with better decision making, accurately predict crop growth, reduce the use of harmful chemicals and maximise crop production

To see the positive effects drone technology is having on agriculture, read this BBC article on how farmers from El-Salvador are for the first time sparing their sugar crane crop thanks to drone technology and how one South African farmer reduced pesticide use by 30%.

Drone technology is always evolving, the future for drones is very exciting, they are already being used in a range of industries like construction, mining, and environmental monitoring. The list above is just a small selection of the many ways drones will become an integral part of our lives in the near future, which one are you most excited about?