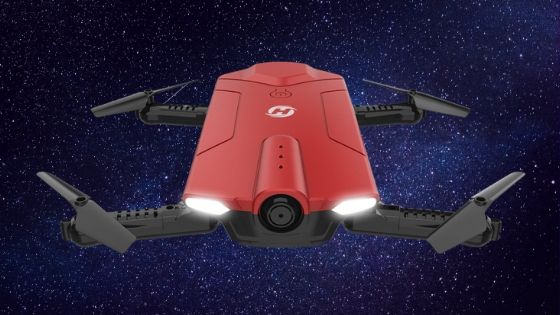 If you are looking for a cheap beginner friendly drone that is easy to fly, the Holy Stone HS160 is a good choice. It’s a foldable drone which makes it very compact and easy to carry around, this makes it a great drone to travel with. It comes with some really neat features like the 720p HD camera which comes with FPV capability. Its got a short flight time but the package does come with an extra battery so that’s an added bonus.

Welcome to my review of the Holy Stone HS160, Holy Stone are one of the leading manufacturers of budget friendly drones that are especially suitable for beginners.

I have already reviewed several drones from Holy Stone and on the whole, they have all been very positive. Foldable drones are becoming extremely popular after the immense success of probably the best foldable drone,The DJI Mavic.

Although the Holy Stone HS160 is now where near as powerful or feature rich as the Mavic, it is a foldable drone that comes with many exciting features and is an excellent drone for beginners. This is a budget friendly drone that will mkae an excellent gift idea for birthdays and any other celebatory occasions.

The HS160 is well-designed, it’s a foldable drone that fits on the palm of your hand when folded up. Its weight and design means it a good drone to travel around with, its made out of durable plastic and comes in two colours, all black and all red. 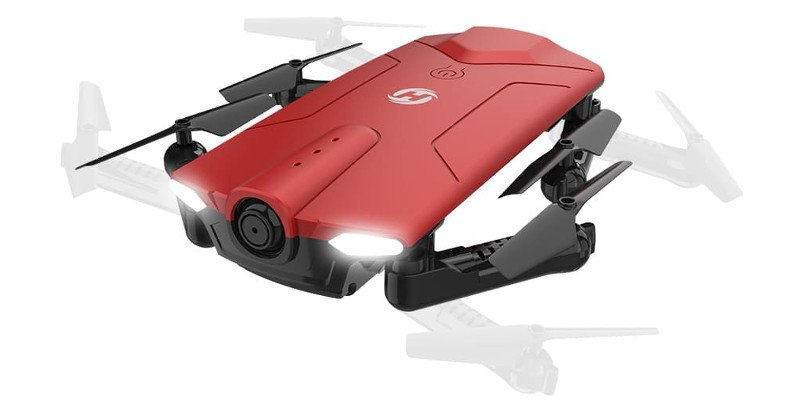 There is a camera and two LED lights at the front, the LED lights makes it suitable for nighttime flying. The battery is placed on the belly and its one of those modular batteries that is safer and keeps charge for longer.

The package comes with standard drone accessories, however, they do give you an extra battery, which is nice because, you would need to purchase one anyway because flight time on this drone is a little short. For a drone that costs less than $100, its has some impressive features and one that kids and beginners will enjoy flying.

One of the first things I look at before I review a drone is if it comes with a camera, cameras are one of the main reasons I love flying drones. You get to see the world in a completely different way and experience views you would only be able to on planes and helicopters.

The Holy Stone HS160 comes with decent HD camera that is capable of recording in 720p, it’s not the most impressive camera but considering the price, its worth it. You can also take some decent aerial photography with the cameras 12MP sensors and as the drone comes with FPV capability, you can live stream videos straight to your mobile device.

Being a budget drone, the transmission distance for video streaming is less than 30 meters which isn’t much, so keep it within that range if you want to utilise its FPV features. Overall control range without FPV is 50 meters.

This is one of the least impressive aspects of this drone, the remote control looks like one of the video games controllers from the 90’s!! I know it’s a budget drone, but they could have designed it so that it looks aesthetically pleasing to the eyes.

There is a smartphone attachment on the top so you can make use of the drones FPV feature, you can also fly the drone just with your smartphone via the HS-D2 app. The controller has 4 speed modes, one is headless mode, this is best for beginners as you will not be required to know the orientation of the drone to fly it.

The other is speed mode and this will require a bit more skill to use as the controls are a bit more sensitive and headless mode is turned off so will have to know where the drones head and tail is during flight.

The Holy Stone HS160 comes with some cool features like one button take-off and landing that will make it even easier to fly this drone. This is a very cool feature, especially the one-button landing as you can land your drone quickly if you think you are losing control.

He FPV function can be accessed via its app which can be downloaded from both Google and Apple App Store. The app is simple to use and allows you to take pictures and record videos, you can also control the drone just through the app.

The other cool features I really like about this drone is that it is compatible with VR headsets. This will allow you to have a more immersive flying experience and get closer to what it feels like to be actually flying.

It has a built-in barometer for altitude hold, this basically gives you more stability during flight and also allows the drone to hover better when to controls are let go.

The drone has a flight time of around 9 minutes, which isn’t much, but it is in line with other drones in its price range. The good thing is that you get an extra battery so you can charge them both and enjoy flying the drone for longer

The batteries do not cost much, so even though you do get an extra battery, I would advise you purchase a couple more.

If you fly the drone with just your smartphone you can access the gravity sensor mode, this will allow you to control the drone through hand movement.

The Holy Stone HS160 is a good beginner friendly drone that comes with a decent HD camera and some cool features like gravity sensor mode FPV. Its compact foldable design makes it an excellent drone to travel with and it has LED lights that makes it suitable for nighttime flying. I wish the flight time was a bit longer, luckily the packages does come with an extra battery and for a drone that is under $100, its