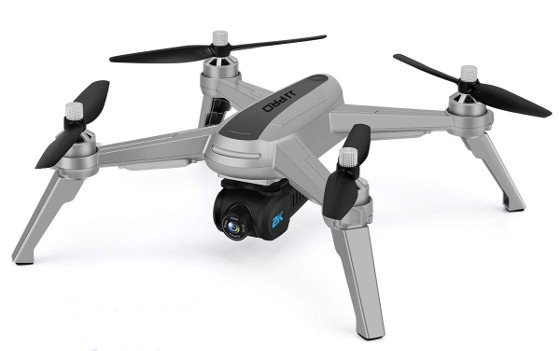 The JJRC X5 comes with an exceptional 2K camera and 3 intelligent flight modes, its easy to fly and has a flight time of 18 minutes. Its small and lightweight and comes with brushless motors that provides it with more power efficiency and speed. If you are looking for a HD camera drone with advanced features and one that is easy to carry around, the JJRC X5 will be a good choice.

Hi and welcome to my review of the JJRC X5 HD camera drone, this is definitely one of the coolest looking drones I have reviewed on this site.

JJRC have been making RC toys for over a decade and have released some impressive drones over the past few years. Their drones are mainly targeted towards beginners and usually cost less than $200 but many of them do come with some advanced features like the JJRC X5 2K camera drone.

If you are in the market for a low-cost high-quality HD camera drone, I think the JJRC X5 may be something that may interest you, keep reading this review to find out more about this impressive flying robot.

First thing I want to mention is that I really like the overall design of this drone, the grey metallic colour scheme, the widened landing legs and the way the HD camera is supported looks very cool. 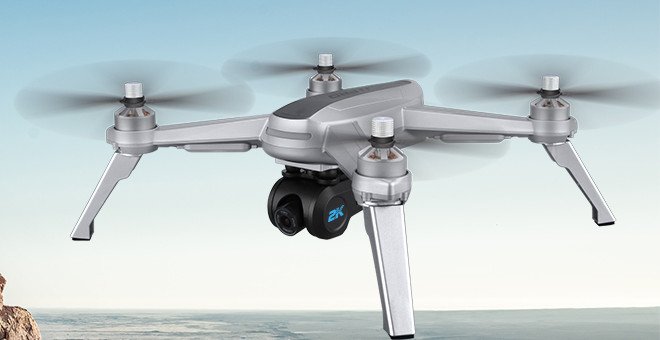 It’s a small and lightweight drone that measures 13.8*13.8*3.8 inches and weighs just over 400g, its small enough to carry around with you and would make a great drone to travel around with. I kind of wish this drone was a foldable drone ( my favourite type of drone ), it would have made it so much easier to store and carry around with you.

Still, it’s a relatively small drone so carrying it around will be no problem, its made from ABS plastic which is highly durable and the drone feels solid like it will not breakdown if you crash during your first few flights.

Like a lot of new drones, it has LED lights underneath each of its rotor arms, these lights serve a couple of solutions, they indicate when your drone compass is fully calibrated and they are useful to fly during the night.

The JJRC X5 comes with four powerful brushless motors, these are more efficient than your traditional brushed motors, they are also quieter, provide more thrust and speed. The drone is pretty fast, reaching a maximum speed of 30 km/h, if you are a beginner I would advise not fly this drone at its fastest, as you are more likely to seriously damage your drone.

The drone has a pretty decent flight time, especially for its, on average you will get anything between 16-18 minutes from one battery charge. The battery is one of those modern lipo batteries, it has 1800 mAh charge, it’s a slick-looking battery, its lightweight and slots neatly in the back of the drone.

Although 18 minutes is a good flight time, it’s not enough to fully enjoy flying this drone, hence you should consider purchasing extra batteries. Fortunately, with the current package, you are provided with an extra battery, so that is another plus point for the JJRC X5.

The last thing I want to mention before I get to the main features of this drone is regarding the remote controller. There are some drone controllers that are outright ugly and feel awkward in your hands, however, this is not the case with the JJRC X5 controller. 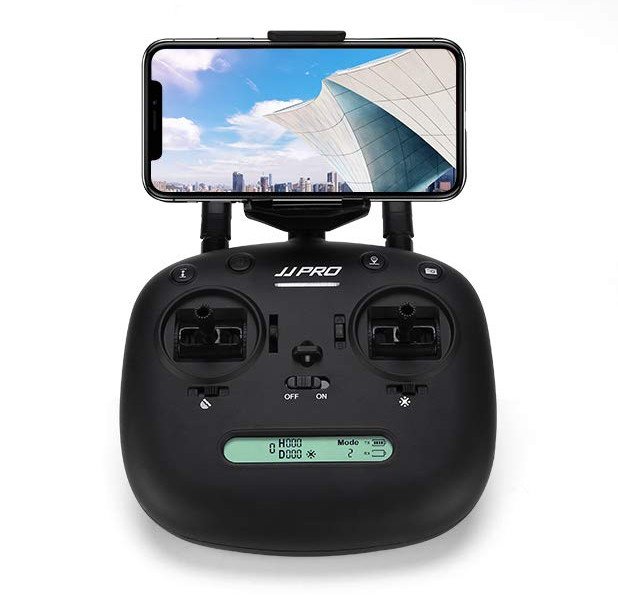 It has a very modern feel to it, just like the drone, and with its smooth rounded edges, its very comfortable to hold. There is a smartphone holder that pulls out from the top, it’s big enough for a large smartphone but not a tablet. With its 5g Wi-Fi technology, video transmission range for this drone is around 300 meters, however, this range is an estimate for flying in optimal conditions. Expect the range to be a little less than that.

It has an useful LCD screen at bottom that will show you data about the drone like height, distacne, battery level and the number of satellites it has locked onto.

If you are not using the FPV feature and just using the remote control to fly the drone, the range increases to around 500 meters. Also, you should be aware that you can fly the drone just using your smartphone but the range is reduced even further and some features will not be accessible. 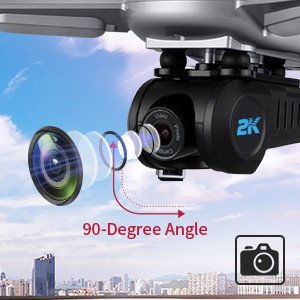 Now, the crown jewel in the JJRC X5 is its 2K camera, this is a really good camera that will allow you to shoot some amazing videos and take stunning aerial images.

I love flying drones and the main reason why is because of cameras.

You can see the world from above in all its amazing glory with a camera drone and the fact that the JJRC X5 comes with an HD camera is a plus point.

The 2K camera is neatly placed underneath the drone with a shock absorption holder. The lens has a 120° wide-angled FOV that will allow you to capture more details in your images and videos.

You can also rotate the camera 90° up or down via the remote and get the angle that you want to shoot from.

It does not have any kind of gimbal system for image stabilisation but the shock absorption holder will minimise any kind of distortion, there is still some jello effect when you use the FPV feature but overall the video and image quality is very good.

The JJRC X5 comes with the following intelligent flight modes;

Follow Me – Pretty self-explanatory, in this mode, the drone will lock on to your smartphone and follow you wherever you go. A great way to record yourself when going for a log walk or hike. However, several people have complained that this flight mode does not always work, problems like this happens on newly released drones. Usually they are resolved with firmware updates, so this shouldn’t be an issue for long.

WayPoint – This mode allows you to draw a route on the app and the drone will follow along that path and return home automatically. A good way to take videos of your favourite places without needing to worry about controlling the drone.

Orbit Mode – Lock the drone to a point of interest and the drone will orbit that position. A cool way to take selfies and short videos.

Automatic Home Return – The drone will return home at the push of a button; this mode also activates when there is low signal or when the battery is low on charge.

As you can see from the video below, the drones overall flight performance is very good. It hovers accurately and maintains a steady altitude, its pretty fast, so if you are a beginner make sure to fly in a wide-open area. The live streaming is pretty good as well but there is lag the further away the drone is.

As I stated earlier, flight time is around 18 minutes which is pretty good, you get an extra battery so you will not need to wait for the five hours it takes to fully charge the battery to fly again.

It’s a lightweight drone, so I would advise against flying in windy conditions especially if you are a beginner.

The JJRC X5 is an awesome HD camera drone that is suitable for everyone, you will enjoy flying this drone and using its 2K camera to take some stunning aerial images and video footage. Its small and lightweight which makes it great to travel with, It’s relatively cheap but I do think there are better options like the Eachine E520S and Holy Stone HS720.