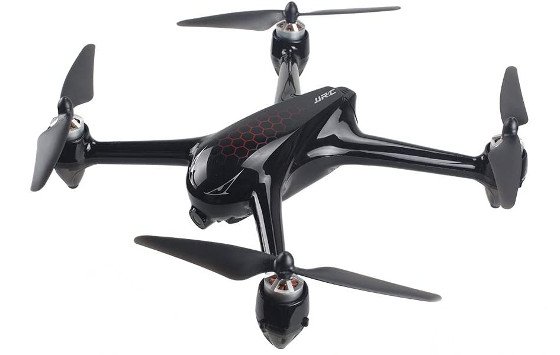 The JJRC X8 Cetus drone is a rebranded version of the Bugs 2 drone, it’s a decent drone that comes with some advanced features. The drone has a solid structure and will not be easily damaged, it comes equipped with brushless motors for stable flight performance and has a GPS system that will allow you to track the drone more accurately and fly it autonomously through its three smart flight modes. The drone has a flight time of around 16 minutes and a transmission range of 800 meters.

Hi and welcome to my review of the JJRC X8 Cetus drone.

JJRC are well-known for their radio-controlled toys, especially their popular range of low to medium cost drones.

They have some really popular drones on Amazon and Banggood and the JJRC X8 Cetus is one of them.

Drones are very fun to fly, especially the ones with HD cameras, they allow you to take some nice videos and images and you can view the world from above which is always exhilarating.

The JJRC X8 Cetus comes with many of the features you would expect from a modern consumer drone, it is not JJRC’s most powerful drone but for beginners and casual flyers, it’s good enough.

Want to know what else this drone offers? Carry on reading this review and find out.

If you are a drone enthusiast, this drone may look familiar to you, the JJRC X8 is actually a rebranded version of the MJX Bugs 2 drone. 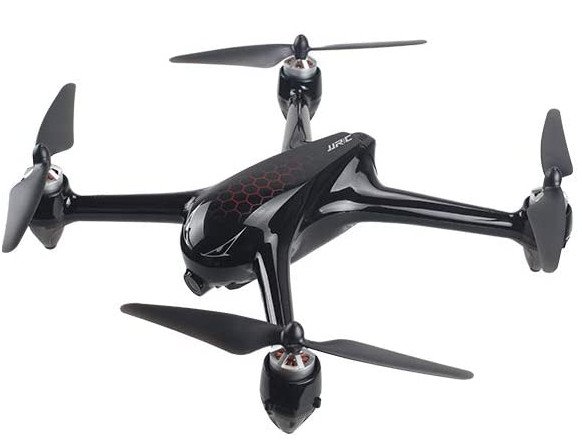 However, in my opinion, the X8 actually looks much nicer with its all-black colour scheme and the honeycomb pattern on the top. It looks very futuristic and stealthy and has a robust build, it’s not the type of drone that will easily be damaged should manage to crash it now and again.

It’s not a very large drone, however, it is not a foldable drone, so it is not very compact this is important to note especially if you intend to travel around with it, you will need a good drone carry case.

Its also not a very heavy drone, it weighs just under 500g with the battery, however, please be aware that any drone that weighs over 250g will need to be registered if you live in the UK, Canada or the USA.

This is regardless of if you want to fly the drone for fun or use it in a professional capacity ( if you want to use it for the latter, you will also need to obtain a drone license).

As far as I am aware, most other countries do not require you to register a drone if you just want to fly for fun. However, I would still advise you to check out what the rules and regulations are wherever you live just to be safe and make sure that you are complying with the law.

This is a GPS enabled drone, this means a more stable and safer flying experience and it will also allow you to track the drone on the app more accurately. GPS also allows for the drone’s smart flight modes and return to home feature which I will get to later on in this review. 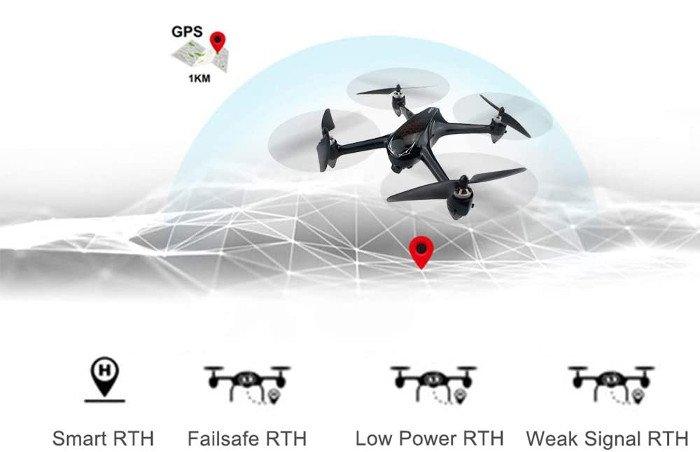 The drone is equipped with powerful brushless motors that give the drone a lot of advantages over a drone that comes with brushed motors. First of all, they are more efficient and last longer, they do not require regular cleaning (although it is good to do so) and they will not overheat.

Brushless motors also allow drones to fly in windy conditions as they are one of the reasons that will keep the drone steady because of their higher rpm and drones with brushless motors are usually fly faster as well.

Like a lot of consumer drones, there are LED lights underneath each rotor and they also act as small landing legs. These LED lights serve a couple of purposes other than creating a nice spectacle if you fly the drone in the night. The LED lights indicate when the drone compass has been fully calibrated and flash in certain ways when it is in different flight modes.

There is a micro SD card slot on the bottom where you will be able to record your video footage and store your photos. Recording media files locally instead of over WiFi results in better quality, so remember to purchase a memory card if you decide to buy this drone.

The JJRC X8 has a flight time of around 18 minutes, this is the official time which is sometimes overstated, so expect something more in the range of 15-16 minutes which is still a decent flight time for a drone in its price range.

However, if you would like to extend the flight time I would advise you to purchase an extra battery or two so you don’t have to wait for the battery to recharge before you can fly again.

Speaking of the battery, the drone is powered by a 7.4v 1800 mAh modular battery that fits in neatly into the back of the drone. It takes a few hours to fully recharge and hence why I advise people to purchase at least one more battery.

Another aspect of the drone I really like is its remote controller which looks nice with its curved design and feels comfortable in your hands. It’s powered by 4 AA batteries which unfortunately are not included with the drone package, so remember to purchase some.

It has a small LED screen on the bottom that will display vital telemetry data about the drone and there is a separate smartphone holder that you attach on the back. The transmission range of the controller is around 800 meters, however, for FPV, the distance is slightly less at around 500 meters.

To make use of the FPV features of this drone you will need to download the JJRC X app which is compatible with both Android and iOS devices. It’s a decent app and has a nice UI, its easy to use, although there are have been complaints that it crashes a lot. However, if you use a newer smartphone there does not seem to be as many complaints.

One of the main reasons I love flying drones is because of their cameras, now the JJRC X8 does not come with the most spectacular camera, but it is a decent camera, especially for its price (although I have seen better cameras on similarly priced drones.)

This is a fixed 1080p camera that can record video footage at 25fps (on the memory card) and stream live video footage over 5g WiFi in 720p. This is not a professional camera drone and it does not come with any kind of stabilisation feature, so you will notice some distortion like jello effect and shakiness.

However, the overall quality is pretty good, especially the footage that is recorded on the SD card. The drone has a decent image sensor that will allow you to take 8mp still photos, again, it’s not the best quality but for the price, it is good enough.

This drone costs around $200, if you want more choices for drones around this price mark, check out my list of the best drones under $300.

Like a lot of drones that are released now, the JJRC X8 comes with a few autonomous flight modes that will allow you to fly the drone hands-free, this will allow you to concentrate more on taking better quality videos and photos.

However, all of the flight modes require a strong GPS signal and the app to be working properly. So, you may run into some issues if the app starts playing up, the best thing to do is just restart the app until it starts working properly.

Follow me – Pretty self-explanatory, in this mode, the drone will lock on to your smartphone and follow you from behind.

Waypoint – In this mode, you will be able to draw a flight path on the app and the drone will fly through that route automatically and come back to its flight of origin.

Orbit – With this smart flight modes you can choose a point of interest and the drone will orbit that position.

Automatic Return Home – This feature can be activated manually by pressing the return home button on the remote controller or the app. It will also be activated automatically when the drone battery starts to get too low or if you lose connection with the drone.

This drone fly’s very well and that is to be expected since it is a better version of the Bugs 2, the drone overs accurately and has a very stable flight performance. This is mainly thanks to its GPS system and powerful brushless motors, the drone also performs pretty well in windy conditions despite being a relatively lightweight drone. However, I wouldn’t advise beginners to fly in any kind of harsh weather as you may lose control and seriously damage the drone. The default flight mode is the headless mode which is great for beginners as you will not need to know the orientation of the drone when you are flying it. The only issue you may have on occasions is with the app, if this isn’t running properly, there will be issues with the FPV and smart flight modes.

This is a very nice drone, I like its overall design, it looks much better than the original Bugs 2 drone and comes with a better camera. It’s a suitable drone for everyone and is very enjoyable to fly. There are better drones around its price range and one of my favourites is the Hubsan Zino which comes with a 4K camera. However, if you like what you read about the JJRC X8 you can find out more about it and see its current price by clicking on the button below.