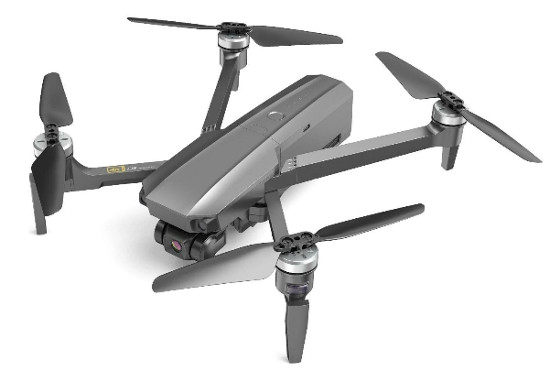 The MJX Bugs 16 Pro is one of the latest cheap GPS drones to hit the market and it comes with some exceptional features, especially for its price. The main feature is the 4K camera, this is a good camera that will allow you to record HD video footage and capture nice still images. Its stabilised by a 3-axis gimbal and also comes with an electronic image stabilisation feature. Other features include autonomous flight modes, automatic return to home and 25 minutes of flight time.

MJX have released some of the best budget-friendly drones and the new Bugs 16 Pro is no different. In this review of the MJX Bugs 16 Pro drone, you will see what this drone has to offer and if it’s suitable for you.

This is one of the best drones from MJX and compares favourably against many of its competitors like the Holy Stone HS720E and the Eachine EX5.

The drone comes with many advanced features, which makes it easier to operate and is suitable for everyone, including beginners.

If you are looking for a good cheap GPS drone with an HD camera, carry on reading the full review of the MJX Bugs 16 Pro, as it may be the drone for you.

Like many of the more popular consumer drones on the market right now, the MJX Bugs 16 Pro is a foldable drone. Foldable drones come with a few benefits, they are compact and usually lighter than traditional quadcopters. This makes them suitable drones to travel with as they are easier to pack and don’t take up too much luggage space.

This drone’s design looks a lot like the Parrot Anafi, the arms folding mechanism gives it an elongated look in its folded form and it kind of looks like a dragonfly when the arms are unfolded.

However, it is much bigger than the Anafi and heavier as well, weighing at around 612g with the battery.

It has a solid build, the drone will not break easily and thanks to its weight and powerful brushless motors, the Bugs 16 Pro holds up well in windy conditions, although, if you are a complete beginner, I would advise you to avoid flying in any kind of windy conditions.

Something I want to mention in regard to its weight and that is, if you live in the UK or the USA, you will need to register this drone with the CAA or FAA. In both countries, the laws are being updated as drone technology improves, and they become more ubiquitous. There are a few rules that you must follow, otherwise, there may be some legal consequences. For more information check out these articles on US drone laws and UK drone laws.

The drone comes with a single GNSS module that connects with the GPS satellite system and allows the drone to fly more steadily and also allows you to track it on your smartphone and fly it autonomously via its intelligent flight modes.

There is also an optical flow sensor on the belly of the drone, this helps stabilise the drone in hover mode, this is useful if you fly in areas with a weak GPS signal.

The official stated flight time of the drone is around 28 minutes, although tests have shown it to be more in the range of 23-25 minutes, which is still good for a drone that costs less than $300.

Although this is a good flight time, it’s always a good idea to purchase at least one or two extra batteries, so you can extend your flight time without having to wait for the one battery to fully recharge.

As for the battery, it is a lithium polymer battery, it goes on top of the drone and has small LED lights that indicate its power level. The battery takes just over an hour to recharge and hence why it’s advisable to purchase at least one more so that you can extend the flight time.

One of the last things I want to talk about before I get to the main feature (the 4K camera) is the drones remote controller. This is a controller that you may be familiar with, it’s one that is used to operate other MJX drones and drones from other brands well.

One of its best features is the LCD screen which displays telemetry data about the drone such as its height/distance, GPS signal and battery life.

It has a smartphone holder on top and a pair of handles that fold out from the bottom that provides a better grip.

You will need to download the M RC PRO app to use the drones FPV and intelligent flight modes and the app will also give you more control over the camera settings.

It’s a decent app, one of the best from a budget drone brand and is fairly easy to use. The app is compatible with both Android (5.0 or higher) and iOS (9.0 or higher) devices and has a good rating on both app stores.

Most people will purchase this drone because of its camera, despite costing under $300, the drone comes with an actual 4K camera.

It’s not going to replace a DJI drone like the Mavic Mini or the Mini 2 but for its price, the camera provides some exceptional quality videos and photos. It has a decent-sized sensor and is stabilised by a 3-axis gimbal and comes with an electronic image stabilisation feature, both of which will help reduce distortion and deliver smooth videos and photos.

Images are shot in 4K (around 8MP) and can only be captured in JPEG format, while video footage can be recorded in both 4k at 30fps or 1080p at 60fps. However, something to keep in mind is that to record in these resolution and frame rate, you will need to use a micro SD card.

There is a memory card slot on the drone and it’s best to purchase a fast memory card of class 10 or above. Without a memory card, the videos and photos will be stored on your smartphone and because these files will be captured over WiFi, the quality will not be as good.

As for the live video feed, it is streamed in 720p and as long as you keep the drone within 200 meters and there is no obstruction and the weather is good, the FPV feed will be smooth. Something else to keep in mind about the FPV is that you will need a 5G enabled smartphone to use this feature.

Like a lot of new drones that have a GPS module, the MJX Bugs 16 Pro comes with 3 autonomous or intelligent flight modes. These are fun to use in open areas and only work when there is a strong GPS signal. Intelligent flight modes allow you to fly the drone hands-free and make for cool YouTube videos.

The three intelligent flight modes include follow me, orbit mode and tapfly.

Follow me mode is self-explanatory, the drone locks on to your smartphone and follows you from behind. In orbit mode, the drone will lock on to a point of interest and circle that position, while in tapfly mode, you will be able to tap anywhere on the app and the drone will automatically fly to that position.

As you would expect from an MJX drone, the Bugs 16 Pro is easy to fly and has a good overall performance. It hovers well and operates decently in mildly windy conditions. It has several speed modes, the fastest of which sees the drone reach a top speed of 40km/h. The FPV quality is good as long as the weather is good and there is no obstruction between you and the drone.

Overall, the drone comes with some fun features and performs well, the camera is the best feature and with it, you can capture some good videos and photos. I believe this is one of the best drones for under $300but if you want more options click here.