The Potensic T18 is a small lightweight drone that comes with an HD camera and has FPV capability. This drone is best suited for complete beginners but even experienced pilots can have fun with this little drone. It comes with some advanced features like dual GPS, automatic return home and follow-me flight mode. You get two batteries each of which provide a flight time of around 8-10 minutes and costs less than $200.

Hi there, in this article I will review the Potensic T18 HD camera drone.

If you are a drone enthusiast, you may have heard of the name Potensic, they are small drone company that have released some very popular drones over the past few years.

A few of them I have reviewed on my site like the T25 and D88, both of which I was impressed by. Drones are very popular and consumers now have a lot of choices when it comes to choosing an HD camera drone at an affordable price.

Potensic drones are not very expensive, most of them cost less than $200 and this includes the Potensic T18 which is one of their earlier releases.

Despite being a couple of years old, the Potensic T18 still remains a very popular drone, it has a 4+ star rating on Amazon and over 300 reviews. If you want an HD camera drone that is fun to fly and not very expensive, carry on reading this review of the T18 as it may be what you are looking for.

Now, if you are a huge DJI fan (like me) one of the first things you will notice when you see the Potensic T18 looks like a mini version of the Phantom drones. This is no coincidence, DJI drones are hugely popular because of their design and innovative technology. 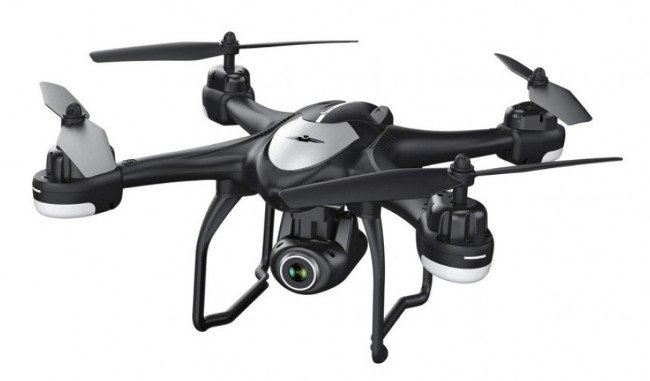 So, it’s not a surprise that smaller drone companies would build similar albeit technologically inferior drones.

The Potensic T18 is a small drone (when compared to the Phantom drones), it measures 27*27*12 cm and has an all-black colour scheme which I very much like as it makes it look stealthy and futuristic.

It comes with a nice aluminium carry case which will come in handy if you plan on travelling around with this drone. Although I personally prefer foldable drones for this purpose as they are more compact and usually very lightweight.

Talking of weight, The Potensic T18 is actually very light, it weighs under 200g which is great if you live in the UK, Canada or the USA as it means you will not need to register the drone. Just for future reference, if you ever purchase any drone that weighs over 250g, you will need to register it before you can fly the drone. This is only for the countries I just mentioned, most other countries do not require you to register a drone if all you want to do is fly for recreational purposes.

Still, I highly advise you to check what the rules and regulations are where you live just to be on the safe side of the law.

One thing that did disappoint me is the brushed motors, these are not very efficient and require a lot more maintenance to keep them working in optimal condition. They also do not last as long as brushless motors, they are cheaper to install and hence why most budget-friendly drones will have brushed motors. However, there are similarly priced drones that come with brushless motors and so was a little disappointed when I saw the T18 didn’t.

However, it’s not a huge issue as the drone still flies well and maintaining the motors is not very hard.

Like most modern drones, there are some cool LED lights on the end of each rotor arm, these lights look spectacular at night time (they are quite bright light), making it easier to fly. The lights also serve another purpose and that is to indicate when the drone compass is fully calibrated, something you have to do before flying any drone.

There are a pair of landing legs that comes with the package, you will need to attach them on before flying the drone. The landing legs serve a couple of purposes, they allow you to land safely and they also protect the camera and the drone lands.

The drone is powered by a 3.7v 1000 mAh lipo battery, this is a nice-looking modern battery that fits in neatly in the back of the drone. There are 4 led lights that indicate its power level and it provides a flight time of around 8-10 minutes. This isn’t a particularly great flight time but then again, it is a cheap drone, and this is usually the standard flight time for these types of drones.

Fortunately, you do get two batteries with the packages, so you can extend your flight time without having to wait for the battery to fully recharge.

The remote controller is pretty nice, it looks like a video games controller and is powered by an internal lipo battery, which you can recharge via a USB port. The buttons have icons on them so you will easily know what each one does. In the middle of the controller, there are some labels that light up and indicate what mode the drone is in and there is a separate smartphone holder that you can attach on the back to make use of its FPV features. 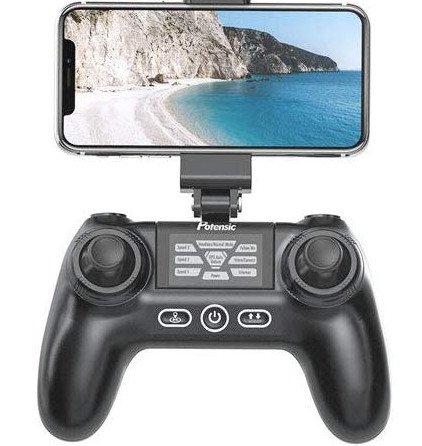 To access many of the drones other features, you will need to download the official app which is called the Potensic G and is available on both Google Play and the Apple App Store. This is a pretty decent app and has got a good rating on both app marketplaces. It’s easy to use and comes with some decent tutorials on how to fly the drone properly. 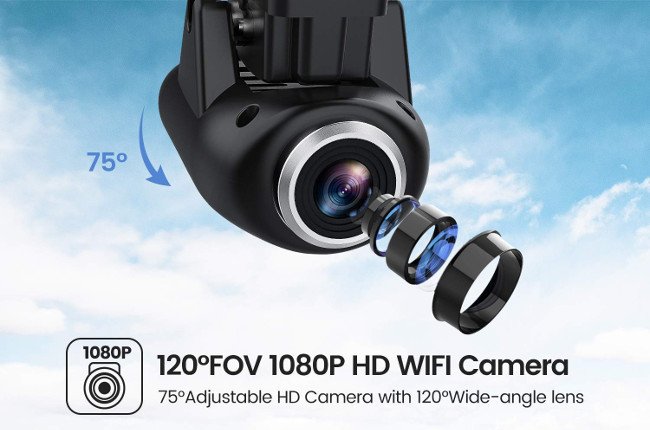 The best feature of this small drone is the HD camera, now before I go any further, I should note that this is a cheap drone and the camera reflects that. It’s a fun drone to fly with and the camera will take some decent videos and images but as it has no stabilisation feature like a gimbal, you will see some distortion like jello effect in your video footage.

The camera has a 120° FOV and can be remotely adjusted 75° to get the viewing angle you want. The live video footage is streamed at 720p and its maximum range is around 100 meters if you fly in good weather conditions.

The video quality is good considering what you are paying for this drone, but you will see some distortion.

For a better camera drone at a similar price range, I highly recommend you check out the DJI Tello drone.

Despite being a cheap drone, the T18 comes with some neat features that will make it easier to fly the drone and have more fun with it.

These features include the following

Dual GPS – With its dual GPS module, the drone can connect to more satellites that will allow you to track the drone on the app more precisely and also allows for the drones autonomous flight modes.

Automatic Return Home – The drone will return home if you lose connection or if the battery gets low on charge. This feature can also be manually activated via the remote controller or app. A lot of drones have this feature and it helps to minimize the risk of losing your drone.

Follow Me – The drone will lock onto the controller and follow you wherever you go, a nice feature that actually works (some cheap drones have this feature but it does not always work). Although being a cheap drone, you will have to keep it in close proximity so that it works properly.

9-Axis Gyroscope – The gyroscope Stabilises the drone when it is flying and allows it t maintain a steady altitude.

This drone is easy to fly, it maintains a good steady altitude and with its GPS feature, it can hover pretty accurately, providing that there is no wind. The overall transmission range is around 300 meters, although this will depend on the weather and if there are any obstructions in the flight path. It’s a very light drone, so if you are a beginner, I would advise you not to fly in any kind of harsh weather.

The Potensic T18 is a decent beginner-friendly drone that comes with some cool features and is very fun to fly. Click on the button below for more information and its price on Amazon.