Potensic T35 Review – A Nice Drone With Some Cool Features 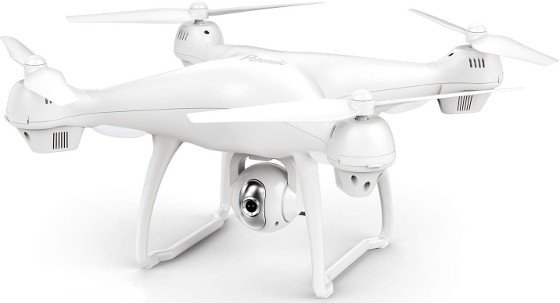 The Potensic T35 is a drone that looks similar to that of the Phantom 4 Pro although not as big or heavy. It’s a nice looking drone that has a sturdy build and comes with a 1080p camera and FPV capability. It also comes with a few advanced features like dual GPS, a couple of smart flight modes and automatic return home function. It has a decent flight time of around 15 minutes and is suitable for beginners. A great drone at an affordable price.

Hi and welcome to my review of the Potensic T35 drone, a hugely popular drone that comes with some cool features and an HD camera.

Potensic are a well-known brand in the world of low-cost consumer drones. They have released quite a few drones under the $200 mark and most of them have proven to be popular with consumers.

I have reviewed a few Potensic drones and my favourite is the T25, the Potensic T35 is a similar drone but is a little bit bigger and comes with a longer flight time as well as a couple of extra features.

When it comes to choosing a high-quality drone at an affordable price, we are really spoiled for choice, there are so many good options now and one of those options is the Potensic T35.

One of the first things you will notice about this drone is that it looks very similar to the DJI Phantom drones minus the size, weight and innovative technology. 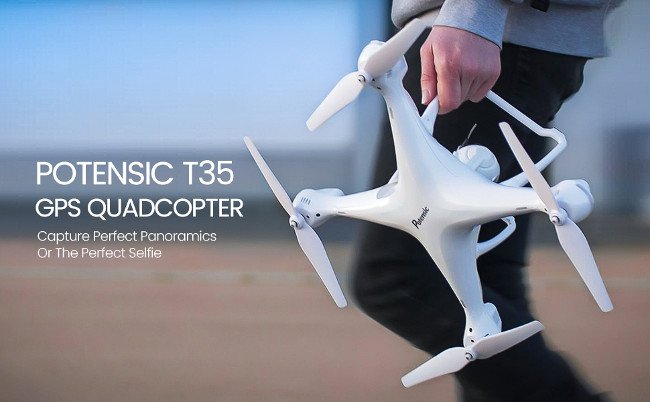 There are a lot of smaller drone companies that copy many design aspects of DJI’s most popular drones, this is understandable since DJI are the leading consumer drone brand and their drone designs are very popular. However, they are expensive and not everyone needs a DJI drone, so drones like the Potensic T35 provide a cheaper alternative for people who have no desire to splash a grand on a DJI drone.

The Potensic T35 is a medium-sized drone, it measures 16.5*16.5*7.6 inches and weighs just under 900g, so it is a heavy drone and not great to travel with unless you have a drone carry case. Like the Phantom 4 Pro, it has an all-white colour scheme and is built from high-quality plastic. It doesn’t feel like a cheap drone, it actually has a premium feel to it which is what I believe Potensic are going for.

It comes ready to fly out of the box (you just need to install the propellers and battery), there are landing legs that will protect the camera when the drone lands, plus it also helps you land safely.

One minor issue with the drone is that it comes with brushed motors and instead of brushless motors. Brushed motors are cheaper to install, hence one of the reasons this drone costs less than $200 but they are also less efficient and not as powerful as brushless motors. It’s not a huge issue, you will just have to remember to maintain on a more regular basis other flight performance will be negatively affected.

You get a set of propeller guards which I highly recommend you install especially if you are a complete beginner as you may crash into things and these guards will help minimise any damage to the drone.

One of the cool features of this drone (and most modern drones) is that it comes with some nice LED lights that are situated underneath each rotor arm. These are big lights and they will help you fly the drone at night and they also make for a nice spectacle. The lights also serve another purpose and that is to indicate when the drone compass has been fully calibrated, something that needs to be done before flying any drone.

The drone is powered by 7.4v 2500 mAh lipo battery, this a modern-looking modular battery that keeps its charge for longer and provides around 15 minutes of flight time. It has some LED lights that indicate its power level and takes around 5 hours to fully recharge, which is a long time. 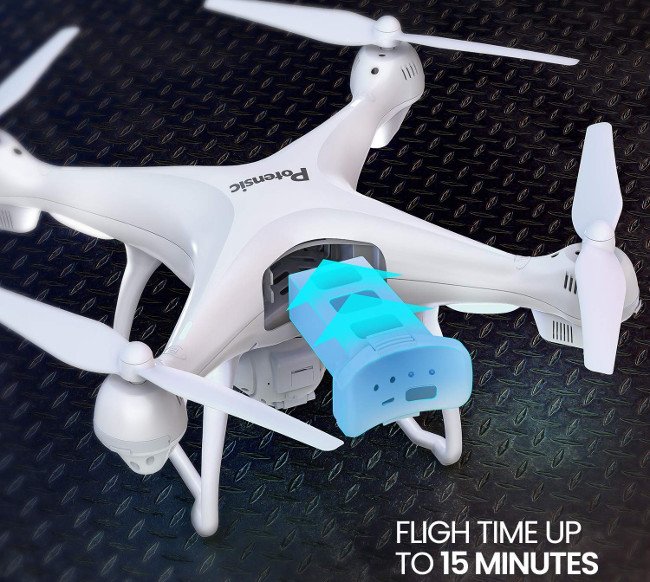 For this reason, I always advise people to purchase a couple of extra batteries to extend the flight time instead of having to recharge the battery to fly again. 15 minutes of flight time is decent for a drone of this calibre but its not fully enough time to really enjoy flying a drone.

Another cool feature of this drone is it’s fantastically designed remote controller which compliments the design elements of the drone. I mention this because I have seen many ugly drone controllers, not that its important as long as they work but it’s nice to have a controller that not only works but looks good as well.

Its quite a large controller but not so large that it feels uncomfortable to hold, it has a curved design and buttons that are easily identified by their icons. 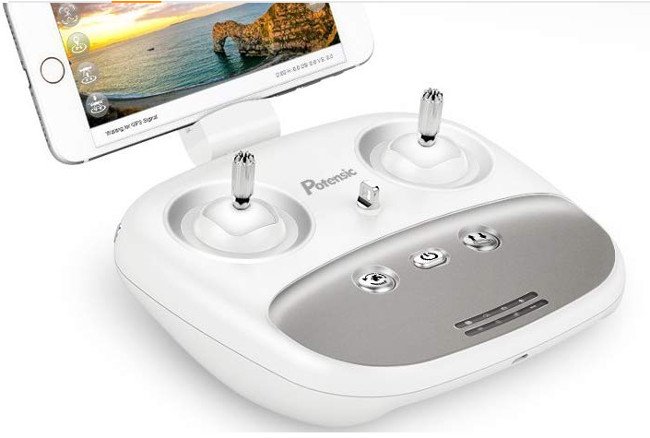 There is a smartphone holder on the top that can hold a large smartphone but not a tablet and it is powered by an internal rechargeable lipo battery. It has a transmission range of around 300 meters but this is only in optimal conditions, expect something around 250 meters and for FPV, the range is even lower at around 150 meters which is pretty much standard for drones at this price range.

To make use of its FPV and smart flight modes, you will need to download the official app which is called the Potensic G. It’s compatible with both Android and iOS devices and has a pretty decent rating on both app marketplaces. Its an easy to use app with a clean interface and has some nice beginner-friendly tutorials to help you avoid any issues with flying the drone.

Now, without a doubt, one of the main reasons for the popularity of drones is because most of them come with HD cameras. These cameras allow you to view the world from the air which is always fun and exciting.

With the Potensic T35 camera you can take some good videos and images with its wide-angle lens that can be remotely adjusted 90°. The camera has a micro SD card slot on the back that can take a memory card of up to 32gb. To get the full 1080p HD video resolution, you will need to record it on the memory card. The live streaming quality is only 720p, its still decent and as long as you fly in good weather conditions, there should be no interference.

As the drone has no stabilisation feature, you will notice a bit of distortion and jello effect which is expected from a camera of this quality. It’s not a huge deal as you will not be using the videos and images for any kind of commercial reasons, so a little distortion will not be an issue.

However, if you do want an affordable drone that takes professional-grade videos and images, I highly recommend you check out my article for the best cheap 4K camera drones.

Like most modern drones, the Potensic T35 comes with some advanced features that will help you fly the drone more easily and have more fun with it.

These features include the following:

Dual GPS – With GPS+GLONASS, the drone can lock on to more satellites which will provide a better flying experience and allow you to tack the drone on the app.

Waypoint – Allows you to draw a route on the app and the drone will fly along that path automatically. This flight mode works only in areas with a strong GPS signal.

Follow Me – Pretty self-explanatory, the drone locks on to the remote controller and follows you wherever you go.

9-Axis Gyroscope – This advanced gyroscope allows the drone to maintain a steady altitude during flight.

Automatic Return Home – The drone will automatically return home if you lose connection or if the battery gets low on charge. This feature can also be activated manually via the controller or app. A great feature that reduces the risk of losing the drone.

This a good drone, it’s easy to fly and holds up pretty well even in mildly windy conditions. It’s a fast drone that has three speed modes, although if you are a beginner, I would advise you to fly in its default speed mode which is the slowest. With its GPS module, the drone will hover if you let go of the control sticks and allow you to take better images and videos.

This is a good drone that is suitable for everyone including beginners, it has a good camera, comes with some fun features and has a decent flight time. Click on the button below for more information.