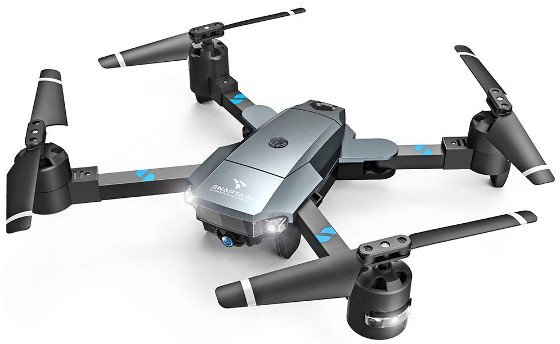 The Snaptain A15 is a foldable drone that comes with a 720p HD camera and several advanced features that will make flying this drone a lot of fun. Advanced features include FPV, which will allow you to stream live video footage to your smartphone, voice control, gravity sensor mode and automatic home return. The A15 is also compatible with VR headsets to give you a more realistic flying experience and has a flight time of 7-10 minutes on one battery charge. A good overall drone and great for beginners.

Welcome to my review of the Snaptain A15 drone.

Are you looking for a cheap foldable drone with an HD camera and some cool features? You have come to the right place because the Snaptain A15 drone ticks all those boxes.

A few years ago there were hardly any low-cost drones that came with an HD camera and advanced features, however, the huge growth of drones has changed all this and now we are spoiled for choice.

Snaptain are relative new-comers to the consumer drone market, they haven’t released many drones, however, the ones that are currently on the market have proven to be very popular. This is especially true for the S5C drone, which is one of the most popular beginner-friendly drones on Amazon.

The Snaptain A15 drone may not be their most advanced but as you will see from this review, it is a very fun drone to fly.

The Snaptain A15 is a foldable drone, these are my favourite types of drones, mainly because they are easy to carry around and do not weigh much. 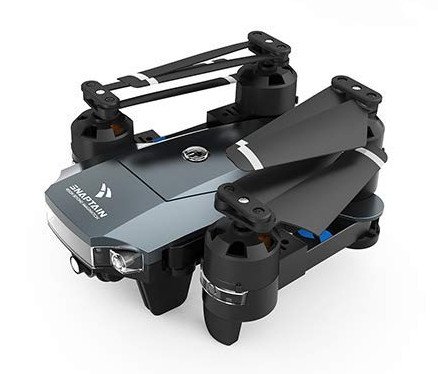 In its folded for the Snaptain A15 is very compact, no larger than an adult hand and it comes with nice little carry bag. If you are a frequent traveller and looking for a nice cheap drone that will not take up too much space in your luggage, the A15 is a good choice.

It’s made from ABS plastic and has a solid build, the drone weighs over 250g so, if you live in the USA, Canada or the UK, you will need to register the drone before flying it. Please do check the rules and regulations for flying drones if you reside outside of the countries I mentioned.

The drone kind of reminds me a little of the DJI Mavic Pro with its metallic grey colour scheme and HD camera on its nose. The drone comes with brushed motors and collapsible propeller guards, there are LED lights on the side of all four rotors. These LED lights serve a couple of purposes, first of all they look awesome at night time and this makes them good for orientation and they also help to indicate when your drone compass is fully calibrated.

It also has two LED lights at the front and one at the back, combined with the other four, these lights make for a fantastic spectacle when flown during the night.

To protect the camera when you land, the drone has rubber landing legs, two at the front and two beneath the back arms.

The drone is powered by a 3.7v 800 mAh lipo battery, it’s a small battery that fits in on the belly of the drone. Now, as this is a toy-grade drone, the battery life is not much, you can get anything between 7-10 minutes of flight time, which isn’t great but that is normal for this type of drone.

Fortunately, you do get an extra battery, so you will not have to wait for the battery to fully charge before you can fly the drone again. I also recommend you purchase a couple of extra batteries along with the drone because 10 minutes is a short flight time even with two batteries, you are looking at 20 minutes, which in my opinion is still not enough time to fully enjoy flying a drone.

The remote control of the Snaptain A15 is one of the best-looking controllers I have come across for a budget-friendly drone. It kind of reminds me of a video game controller, it’s not too big and is ergonomically designed and feels comfortable in your hands. 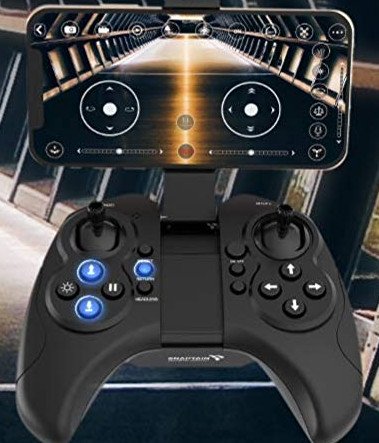 All the controls are labelled so you know what they do and it has small smartphone attachment that flips out from the middle. The controller is powered by 3 triple A batteries which are not included with the package, so if you do purchase this drone, keep that in mind.

You can also control the drone via the Snaptain Air app, which is compatible with both Android and iOS devices. This is a pretty decent app, its UI is intuitive and using the app gives you access to the main features of this drone which I will get to later on in this review.a 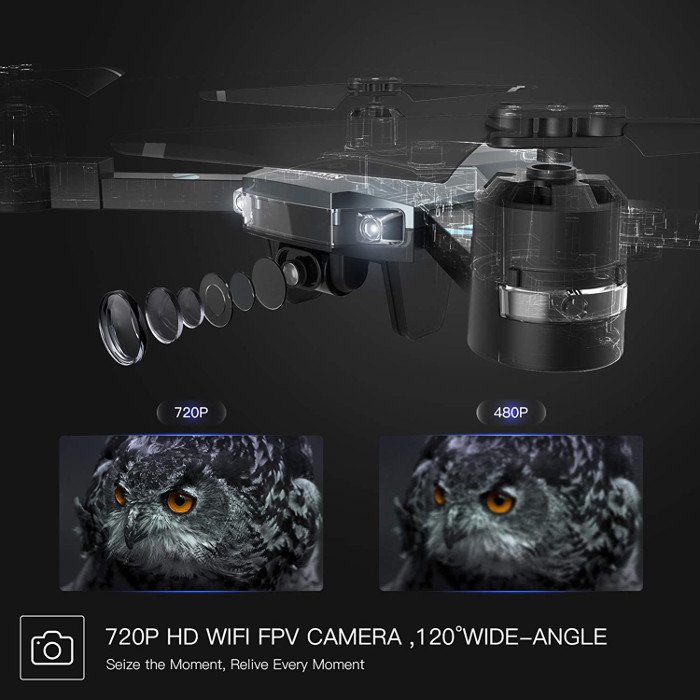 Cameras are probably the best features of a drone (in my opinion), you can take aerial images of your favourite places, stream and record live video footage and take selfies with family and friends. Camera drones are awesome and although the Snaptain A15 camera will not win you any prizes (it’s not supposed to), it will let you take some awesome images and videos.

Its an HD 720p camera with a 120° field of view that will let you capture more details in one shot and the camera can be manually adjusted 45° to get better viewing angles. Although it would have far more convenient if you could do this via the remote or app, however, this is a drone that costs less than $100, so cant really complain. The drone does not have a micro SD card slot, so you will have to save your media files on to your smartphone, so do make sure there is enough memory space for this.

The Snaptain A15 is a toy drone, however, it does come with some really good features that will make flying this drone more enjoyable, these features include the following;

Voice Control – This is one of the best features of this drone, you can control the direction the drone will fly through your voice. A cool feature that will definitely impress family and friends.

Gravity Sensor Mode – Another cool feature, with gravity sensor mode, the drone will follow whichever way you move your smartphone.

VR Headset – The Snaptain A15 is compatible with 3D virtual reality headsets, flying the drone with the use of VR headsets will give you a more immersive flying experience.

Trajectory Flight – A smart flight mode in which you can draw a flight path on the app and the drone will fly along the route automatically and come back home.

Headless Mode – The default mode of the drone, perfect for beginners as it means the controls are straight forward and you do not have to worry about the orientation of the drone.

The drone also comes with an automatic return home feature that will minimise the risks you losing or damaging the drone, 3-speed modes and a button on the controller that will make it do 360° flips.

The drone flys well, it maintains good altitude and is easy to control. Since it is a toy drone, it only has a range of around 90 meters, so you cannot fly it too far out. The FPV works fine and the video streaming is of decent quality.

If you are looking for a cheap beginner-friendly drone that has some really good features and an HD camera with FPV capability, The Snaptain A15 is a good choice. This drone is suitable for everyone but especially for beginners, features like its voice control and gravity sensor mode are easy to use and makes the drone more enjoyable to fly. Click on the button below for more information and its current price.