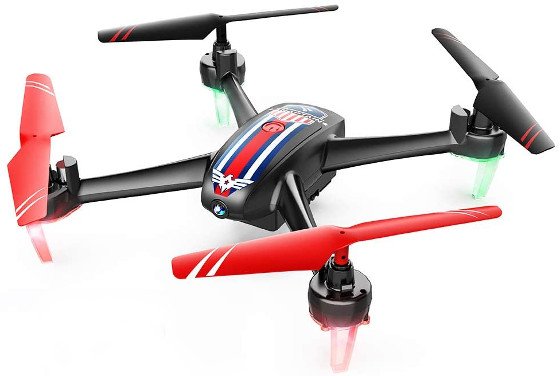 The Snaptain SP660 is a beginner-friendly drone that comes with a 720p camera, gesture and voice control modes and comes with a flight time of 20 minutes. It’s a nice little drone that is fun to fly and comes with FPV capability, it is also compatible with VR headsets for a more immersive flying experience and has a transmission range of around 80 meters.

In this article, I will review the Snaptain SP660.

When it comes to cheap drones, we are truly spoiled for choice, there are a lot of good low-cost drones on the market now and the Snaptain SP660 is one of them.

Snaptain are beginning to establish themselves in the world of low-cost consumer drones. They have a few high-quality low-cost drones in their catalogue and one of my favourites is the S5C.

The Snaptain SP660 is one of their cheaper models as it costs less than $100, however, don’t let the cheap price tag fool you. This drone comes with some nice and fun features and is suitable for everyone.

Carry one reading this review to see what else this drone offers and if it something that you are looking for.

So, this is a nice looking drone, it’s not a foldable drone, which is my favourite type of drones but it does have a nice design and it is one of the more colourful drones I have come across. 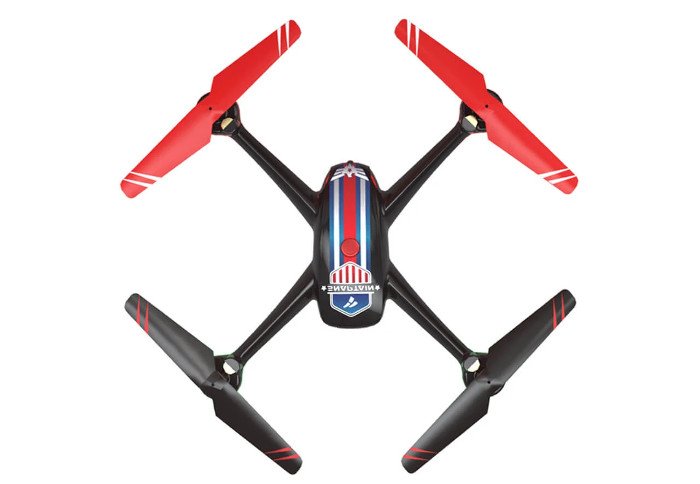 The body is made from plastic, it’s very light, so I would not recommend you fly this drone even in slightly conditions. It weighs around 200g, so it’s easy to carry around and its weight also means that you will not need to register the drone if you live in the UK, Canada or the USA.

As I said, it’s a colourful drone, one pair of propellers are coloured red and the other is black. The body is all black but at the top, it has a kind of emblem that reminds me of the emblem of Atletico Madrid (a Spanish top tier football club), it makes the drone stand out and gives it kind of sporty look.

It comes with brushed coreless motors, these are quite powerful and allows the drone to fly faster, but they are not as efficient as brushless motors and will require more regular maintenance. One piece of advice I always give is to clean the motors regularly to keep them in optimal conditions especially if they are brushed motors.

You get some propeller guards which I highly recommend you install as it will help to minimise any damage that may occur if you crash the drone and if you are a beginner, you will crash when you fly a drone for the first time. 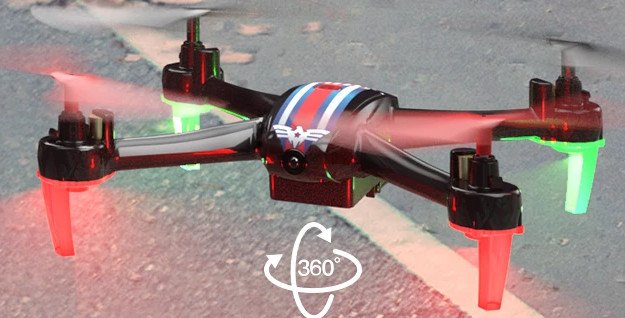 Underneath each rotor arm are small landing legs that also have LED lights in them. These are very bright lights and look spectacular if you fly the drone at night, these lights will also help you to calibrate the drone compass and allow you to troubleshoot any problems that may occur with the drone.

There is a micro SD card slot on the back, its compatible with a class 10 memory cards and the maximum capacity is 32gb. Unfortunately, you do not get a memory card with the drone package, so you will need to purchase so that you can record videos and images in their highest quality.

The Snaptain SP660 is powered by a 3.7 2000 mAh lithium-ion battery, this is a small battery but provides a surprisingly long flight time. The official time is 20 minutes from one charge but its more in the range of around 15-18 minutes, which is still pretty good for a cheap drone.

Plus, you get an extra battery with the drone package which will allow you to extend the flight time without having to wait for the battery to fully recharge (which takes a few hours).

One of the best features of this drone is its remote controller, I have seen some ugly drone controllers but this one looks like a modern drone controller. It is large but still comfortable to hold, this is due to its curved design and rubber grips on the back. 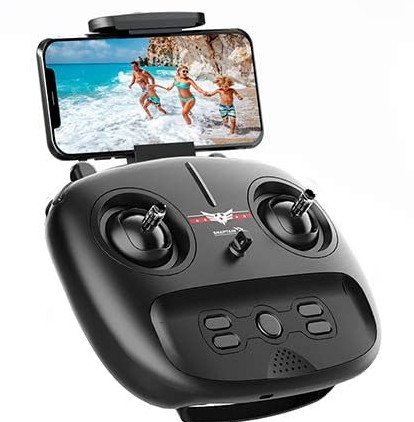 There is a smartphone holder that pulls out from the back, it can hold a large smartphone but not a tablet. All the buttons are easily identified by their icons so you will know what they do without having to refer to the manual.

It’s powered by an internal LiPo battery, so need to purchase any extra batteries and it has a range of around 80 meters. This is the official range, which is sometimes overstated, so expect something a little less.

If you want to make use of the FPV features, you will need to download the Snaptain Era app which, is compatible with both Andriod and iOs devices. This is a decent app and has a pretty good rating on Google Play Store, it’s easy to use and you get access to many of the drones other features.

You can also operate the drone with just your smartphone, however, the transmission range is much less and the controls can be a bit iffy but it is more fun to fly with.

One of the main reasons for the rise in the popularity of drones is because most of them now come with cameras. The Snaptain SP660 comes with a simple 720p camera, it’s fixed on the nose of the drone and it will allow you to record decent videos and photos.

The quality of the videos and images are pretty good for a toy grade drone, I have seen better (check out the DJI Tello drone) but for what you pay, it’s good enough and kids will enjoy it a lot. 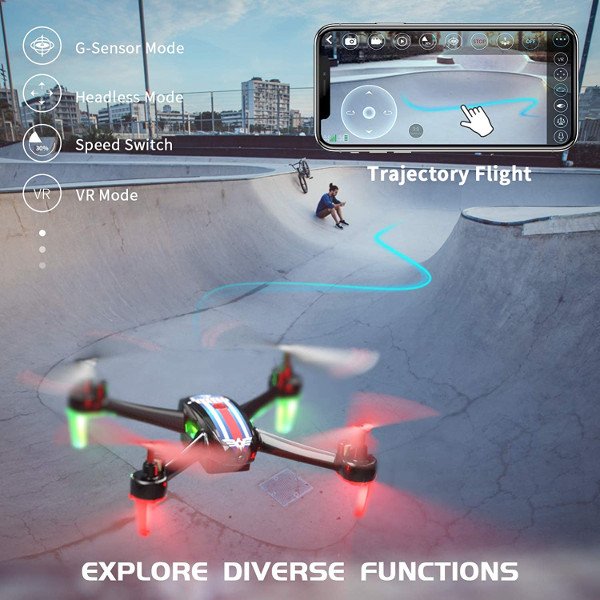 Despite being a toy drone, the Snaptain SP660 does come with some advanced features, they include the following:

Voice control – Snaptain seem to have this on all their drones, it’s a nice feature and very fun when it works, although it can sometimes be a hit and miss.

Gesture control – allows you to take videos and photos through the mere gesture of your hands, a great way to take selfies!!

Gravity sensor mode – In this mode, you will be able to control the drone by moving the controller or your smartphone around.

Trajectory flight – A hands-free flight mode that will allow you to draw a flight path on the app and the drone will fly along the route automatically.

The drone also comes with a one-button take-off/landing feature and you can do some cool 360° flips at the push of a button. It’s also compatible with VR headsets that will give you a more immersive flying experience.

This drone is easy to fly, it comes with headless mode as its default setting, so all flying it is straight forward. It also comes with altitude hold, so it will hover if you let go of the control sticks and there are three-speed modes that you can switch between that will allow you to test your flight skills. Sometimes the voice control and gesture control take a few goes to make them work but other than that, most of the features work as they should.

I really like this drone, its fun to fly, comes with some cool features and is suitable for everyone. Click on the button below to find out more and to see its current price on Amazon. If you want a better alternative, I highly recommend you check out the DJI Tello, which is my favourite drone for beginners.