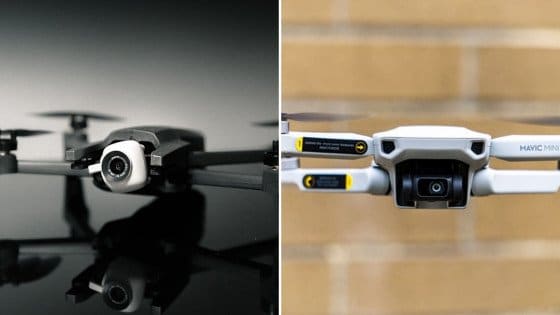 Welcome to my comparison of the DJI Mavic Mini vs Parrot Anafi, these are two of the lightest and most advanced drones on the market. These two drones are perfect for people looking to get into drone photography but don’t have the budget for a $1000 drone.

The Parrot Anafi has been on the market a few years now and was originally released as a competitor to the more advanced Mavic Pro. Although it never threatened the market dominance of the Mavic Pro, it is a very good drone, especially since its price has been significantly reduced over the years.

The Mavic Mini, on the other hand, is a much more recent release, it is DJI’s smallest and lightest drone and despite its size, the drone comes with many of DJI’s signature features that have made it a hugely popular drone.

So, which one is better? Well, they both have their pros and cons, in some areas, the Mavic Mini comes out on top while in other areas the Parrot Anafi has the better features. I personally would choose the Mavic Mini, however, they are both very similar when it comes to the main features and at the end of the day it will come down to your budget and personal preference.

The Mavic Mini has an inferior camera, but it still is an exceptional piece of equipment. The camera can record video footage in 2.7k at 30fps or 1080p at 30fps with a bitrate of 40 Mbps. Despite being a mini drone, it comes with an advanced 3-axis motorised gimbal that will make sure your videos and photos are crystal clear and free from any kind of distortion. Unfortunately, you can only shoot in JPEG format so you will not have much option to enhance images when it comes to postproduction. Images are captured in 12MP with a 1/2.3-inch CMOS sensor and despite having little HDR support, the quality is still exceptional for both images and videos.

With a 4K HD camera and aspheric wide-angles lens, the clear winner here is the Parrot Anafi. This is a fantastic camera that is stabilised by a hybrid 3-axis gimbal and can be tilted 180° that will allow you to get more viewing angles and get the perfect shot you are looking for. The camera has a larger lens than the one on the Mavic Mini and comes with a 21MP CMOS Sony image sensor. It can capture images in both DNG RAW and JPEG and comes with good HDR support that gives you more options to enhance the image. Another feature that separates this camera from the Mavic Mini is its lossless zoom which will allow you to get closer to your subject without losing quality. It also has a feature called dolly zoom which is used in cinematography to create a kind of vertigo effect. The camera can record 4K video footage in 24/30fps or 1080p at 60fps with a recording speed of 100 Mbps. You can also create hyperlapse videos and played back at multiple speeds and also create slow-motion videos at 720 resolution.

The overall build and design of the Mavic Mini is great for travel photographers, it is a mini drone and easily fits on the palm of your hand when folded up. It weighs just 249g which means you will not need to register the drone if you are just flying for fun. Despite being such a lightweight drone, it actually holds up well in moderately windy conditions thanks to its powerful brushless motors. It has a dual GPS system for better flight stability and also comes with a couple of vision positioning sensors on the bottom that helps you fly in areas with no GPS signal. With size and weight, the Mavic Mini is the ultimate portable drone and this makes it a great choice for a travel drone.

Although the Anafi is not as light as the Mavic Mini, it is still one of the lightest drones on the market weighing at just 320g. It is a great looking drone and has a unique folding mechanism, both its front and back arms fold forward which makes the drone longer and thinner in its folded form. It actually looks quite neat, its frame is reinforced by carbon fiber and it comes with powerful brushless motors which allow the drone to reach a top speed of 55 km/h and fly relatively well in windy conditions. The drone also has an optical flow sensor on its belly that will allow you to fly the drone where there is no GPS signal, so in theory, you could fly it indoors but I think it’s a bit too big for indoor flight. This is a well-built drone that is highly durable and is suitable for commercial use.

The Mavic Mini is easy to fly and hovers accurately thanks to its GPS system and optical flow sensor. It has a range of around 4KM which is on par with Parrot Anafi and has a top speed of 45 km/h and has multiple speed modes. However, one disappointing aspect of the Mavic Mini is that it does not come with any autonomous flight modes. It has several pre-programmed flight modes called quick shots, which as the name suggests, allow you to take quick videos or photos from different flying angles. The drone is powered by a 7.2v 2400 mAh intelligent battery that provides it with a flight time of around 30 minutes which makes it one of the best consumer drones in this category.

The Parrot Anafi also fly’s very well, it can fly in harsher weather conditions which makes it more flexible for professional photographers. You can easily track the drone on the app thanks to its dual GPS system and for professional drone pilots, there is a version that comes with a thermal imaging camera that will expand your options for drone-related jobs. The transmission distance is 4K, same as the Mavic Mini and video can be streamed in 720p at 30 fps. Like the Mavic Mini, it has pre-programmed flight modes that will allow you to take quick cinematic videos and photos. However, it also comes with several intelligent flight modes like images tracking, follow me mode and waypoint. These will allow you to fly the drone hands-free which will allow you to concentrate on taking better quality videos and photos. Its fight time is slightly inferior to the Mavic Mini, although still decent at 25 minutes of flight time.

The Mavic Mini uses the DJI Fly App, this app was developed specifically for the Mini and is much more beginner-friendly than the DJI GO App, although it does come with fewer features. This is a simple app to use and easy to navigate and has some excellent tutorials and tips on how to make the best use of the app. It has a simple video and image editor and comes with some nice video templates that you can use to enhance your videos. The DJI Fly App works on devices running on iOs 10 or above and Android 6 or above.

The FreeFlight 6 App is a little more feature-rich, this is mainly because you have a lot more control over the camera settings. It’s pretty easy to use, although it doesn’t have in-app tutorials like the DJI Fly App. I should also add that the Parrot Anafi is also compatible with a host of other drone apps, these include apps that will help with 3D modelling, photogrammetry, 3D mapping and flight safety.

The Mavic Mini controller is actually bigger than the drone, however, it has a minimalist design, which I like and is very comfortable to hold. It’s powered by an internal Lithium Polymer battery and has a range of around 4km and transmits videos via 5G WiFi technology. You can attach a large smartphone on the bottom

The Skycontroller 3 which is used to control the Anafi drone is much bigger but not too big that it is uncomfortable to hold. It has a smartphone attachment that pulls out from the top and it can hold a big smartphone but not a tablet. The controller also uses 5G WiFi technology and has a transmission range of around 4km.

Both these drones are exceptional, I personally prefer the DJI Mavic Mini because of its compact design and its camera. However, if you are looking to use your drone for professional reasons and not just photography, the Parrot Anafi is the better choice. It has a superior camera, is compatible with a lot of drone apps that are used commercial reasons and comes with a lot more features.