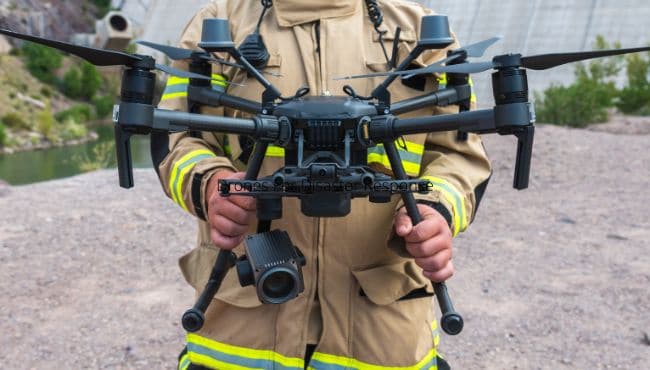 When a disaster strikes, there’s no time to waste—this is why drones are proving to be vital tools in disaster response incidents. Drones can be used to rapidly assess the damage and help coordinate efforts between emergency service agencies, such as local governments, the police, fire service and other emergency response agencies.

There are several benefits of using drones for disaster response and relief operations. They can be used to assess inaccessible areas or where access is restricted and reach remote locations that may not be accessible by humans and manned aircraft.

Drones are also being used for search and rescue operations as well as to deliver vital supplies such as medicine and food.

In order to respond quickly in times of crisis, emergency response providers around the world are increasingly turning to drone technology. In this article, we shall list the main benefits as well as some of the most common uses for drones in disaster response.

Disaster response is a time-sensitive process that requires efficient planning and execution. One of the main benefits of drones is because of their small and compact design, and they can be quickly deployed to help with relief operations.

In any type of emergency situation, quick action is required to reduce risks to human life and obtain an accurate assessment of the disaster so that a thorough response can be put in place.

Drones can play a vital role in emergency response by providing accurate aerial data that are essential for assessing the extent of damage and coordinating relief efforts. By using drones in this way, first responders can save time and allocate resources more effectively.

Another benefit of using drone technology for disaster response is they provide a safe way to collect data in areas that are dangerous for humans and difficult for manned aircraft to navigate. This will keep personnel out of harm’s way while allowing them to regularly fly missions over the affected area. This will provide emergency response teams with up-to-date information and allow incident commanders to make any necessary changes if the data requires it.

Most commercial drones are also easy to operate, they do not require extensive training, and their operating costs are very cheap when compared to something like a helicopter.

How Drones Are Being Used For Disaster Response

Search, and rescue is one of the main uses of drones in disaster response and relief operations. Search and rescue operations can take time getting off the ground, especially if a manned aircraft is needed. It can also be difficult and dangerous for SAR teams to navigate through a disaster area, and so a SAR operation will be very limited if it is only carried out on the ground. However, with drones, SAR operations will be made more effective as they can be deployed very quickly and navigate around areas that are hard to reach by foot. Many drones come equipped with multi-sensor payloads such as a high-resolution RGB camera, thermal imaging camera and night vision sensors, and these will enhance the chances of finding survivors more quickly and allow SAR teams to conduct missions any time of the day or night.

DJI have developed a helpful interactive map that highlights the areas around the world where drones have been used in SAR missions to successful find and rescue people. As of writing this article, nearly 900 people have been saved in 39 countries with the assistance of drone technology. The numbers are most likely higher as DJI only updates the map whenever a report comes in and is verified.

Drone technology is being used for mapping in many industries such as constriction, mining, and agriculture. They can capture far more detail than satellite and manned aircraft, and they come with the added benefit of being easy to deploy and inexpensive to operate.

These features are very important as drones can play a huge role in all phases of disaster response and relief operations.

Disaster response agencies can use drones to map areas that are susceptible to natural disasters such as hurricanes, flooding, earthquakes and landslides. Through the use of photogrammetry software like Pix4D, emergency planning agencies will be able to create highly detailed 2D and 3D maps. These maps will allow them to identify areas of high risk and put systems in place that will mitigate the damage and reduce the risk to life that will be caused by any natural disaster.

Mapping with drones can also be used during the initial response phase of a disaster, and this will allow emergency response teams to assess the situation in real time and see where help is needed the most and allocate resources accordingly.

For post-disaster recovery efforts, drones provide a fast and easy way to map the entire area with detailed accuracy. This will accelerate reconstruction efforts and allow the affected populace to get back to their normal lives as soon as possible.

Wildfires are a regular occurrence in many parts of the world, they can escalate very quickly, and the damage caused by these fires can have a devastating effect on the environment.

Drones are used in a number of ways to mitigate the damage caused by wildfires, they are used for mapping areas that are prone to wildfires. This allows officials to identify where the worst fires are likely to break out. This will allow them to notify anyone living near these areas and have an effective evacuation plan in place.

During the initial outbreak, drones can provide a live video feed of the fire, which will provide real-time situational awareness for those on the ground. For incident commanders, having a live video feed will allow them to monitor the fire and response team and make any necessary adjustments to the response strategy should the situation require it.

Drones are also a great way to locate survivors and help rescue them. They can be flown frequently and at low altitudes, which will enhance the chances of locating survivors.

Drones have also been used for controlled burns, and this is a method used by firefighters and environmental agencies to burn flammable materials like fallen trees, deadwood and dry leaves. This reduces the ability of a wildfire to spread, but it can be dangerous to do manually. Fortunately, there are ways to carry out controlled burns remotely, and one of these ways involves drones.

Many drones can be modified to carry ignition payloads that can be released to set small intensity fires.

One such company that has developed a controlled burning system for drones is Drone Amplified. Their payload can be attached to many types of drones and releases small ignition spheres that can be used for controlled burning operations.

Assessing structural damage after a disaster can be a dangerous task, especially if they have significant damage and are at risk of collapsing. Drones provide a safer, faster and more efficient method of assessing any structural damage caused by any kind of disaster.

5. For Delivery Of Vital Supplies

Drone delivery is on the rise in many parts of the world, and they are especially useful for people who live in remote locations and need vital supplies like food and medicine.

In a disaster situation, drones can be used to deliver vital supplies to people who may be stranded, and there are no viable other means of delivery.

Drone delivery is usually much faster than traditional methods as they don’t have to contend with traffic and can be deployed fast.

According to a survey carried out by Bard University, the most popular drones used by law enforcement, firefighters, and other public safety agencies are DJI drones. This is not a surprise as they are the leading drone manufacturer and have developed a lot of amazing drones over the years.

There are a variety of drones that are used in emergency situations for things like search and rescue and situational awareness, a good prosumer drone like most of DJI’s Mavic and Phantom range of drones as well as Autel Robotics’ latest models will be sufficient.

These drones come with high-resolution cameras with fantastic zoom features and can stream live HD video footage to mobile devices. Many of them come with autonomous flight modes that will allow first responders to plan a flight path and allow them to keep a record of which areas have been covered.

A few drones like the DJI Mavic 2 Advanced, Autel Evo 2 Dual and Parrot Anafi USA come equipped with dual camera systems, which include a high-resolution RGB camera and a thermal imaging camera.

However, many of these drones are limited by their flight time, especially for something as important as serac and rescue operations, and most prosumer drones cannot be flown in rainy conditions, which may also hamper SAR operations.

There are drones that have been designed for commercial operations, they come with many advanced features that make them great for disaster response situations.

One of the best drones is the latest DJI Matrice 30T, and this is a compact foldable drone that comes equipped with a multi-sensor payload that includes an RGB and thermal imaging camera as well as a laser range finder and night vision camera.

This is an all-weather drone that can be operated in the harshest of conditions and comes with a flight time of 40 minutes and a 15km transmission range.

The drone has multiple safety features such as omnidirectional obstacle avoidance and ADB-S receiver and has several redundancy systems in place.

There are also a couple of other drones in the Matrice range, like the 210RTK and 300RTK, both of which come with similar features to the 30T.

The Matrice drones can also be used to map disaster areas as they come with high-resolution cameras and GPS correctional technology like RTK for accurate georeferencing data.

There are drones that have been developed specifically for mapping and come with PPK/RTK technology, long flight times and cameras with large sensors.

The most popular drones for mapping are DJI’s Phantom 4 RTK, the Wingtra One fixed-wing VTOL drone and SenseFly’s eBee X mapping drone.

As we have seen, drones are playing a huge role in disaster response and relief operations. Although they are yet to be widely adopted in these scenarios, there is no doubt about the benefits they provide.