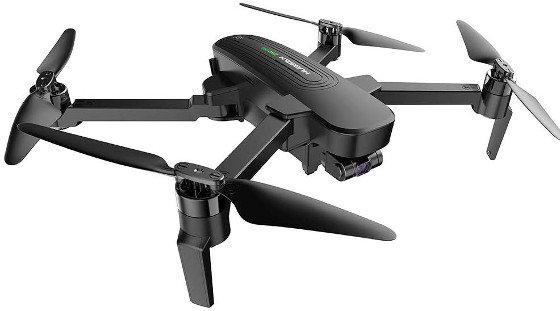 The Hubsan Zino Pro is a 4K camera drone that comes with some amazing features and costs less than $500. It can record 4k videos at 30fps and take some amazing high-quality images that even professional photographers would be pleased with. The camera comes with a dedicated video processing chip from Ambarella and an image sensor from Sony. It comes with dual GPS systems and several smart flight modes and has a flight time of around 23 minutes.

Welcome to this review of the Hubsan Zino Pro, a spectacular drone that comes with an amazing 4K camera and advanced features.

Hubsan are a well-know drone brand that mainly specialises in low-cost consumer drones. Some of the most popular low-cost drones are from the Hubsan brand and many of them I have reviewed on my site.

They recently ventured into the higher end of the drone market with the release of the Hubsan Zino. This is a 4K drone with many advanced features, the Hubsan Zino Pro is the upgrade to this drone, and it comes with many improved features.

A couple of years back, purchasing a 4K drone would have cost you at least a $1000 but fortunately, that is no longer the case with many 4K drones costing less than $500 including the Hubsan Zino Pro.

The Hubsan Zino Pro is one of my favourite 4K camera drones, keep on reading this review to see what else this awesome drone has to offer.

The Hubsan Zino Pro looks very similar to its predecessor, however, it has an all-black colour scheme instead of white, which I actually prefer, the colour makes it look very stealthy and futuristic. There is also a nice green white Hubsan logo on the top and some air vents to keep the internal systems nice and cool. 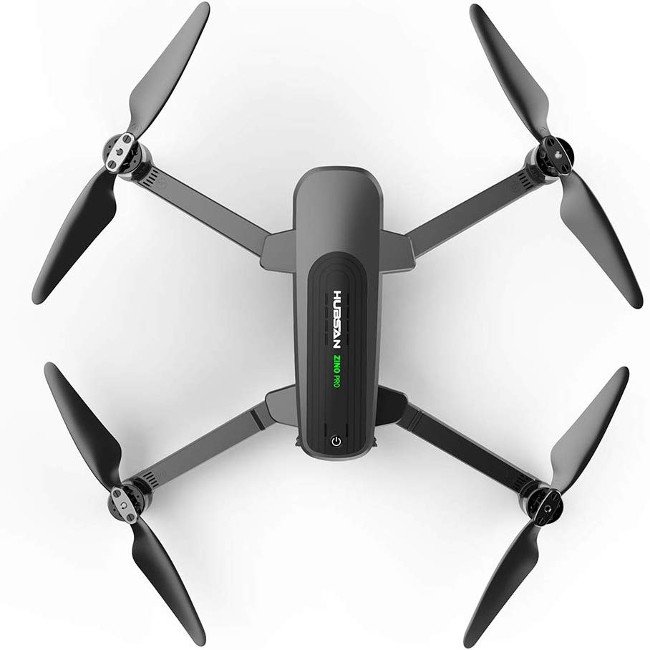 One of the best design elements of the Zino Pro is that it is a foldable drone.

Foldable drones, as many of my regular readers will know, is my favourite type of drone, they are compact and usually very lightweight. This makes them excellent drones to travel with and with an advanced 4K drone-like the Hubsan Zino Pro, this will allow you to capture those memorable moments whilst on your travels.

The Hubsan Zino Pro is a medium-sized drone, just a little a bit bigger than its predecessor, it measures 30.4*25.24*9 cm when it is expanded and weighs around 700g including the battery and gimbal.

It’s not the lightest foldable drone and if it didn’t come with a nice-looking carry case, it would be a hassle to travel with. However, the carry case a nice extra and the drone and its accessories fit nicely into it.

Just a small little note on the drone’s weight, since it weighs over 250g, this means you will need to register the drone if you live in the UK, Canada or the USA. Most other countries do not require any kind of registration if you just want to fly for recreational purposes, however, it is best advised that you still check the rules and regulations where you live just to make sure that you are complying with the law.

Now, back to the design of the drone, it really is a beautiful drone, it’s built with high-grade plastic and feels like a premium drone. It has a very solid feel like it will not be seriously damaged if you crash it lightly. Its design and weight also make it suitable to fly in light windy conditions and tests have shown this to be true. Although if you are inexperienced drone pilot, I would advise against flying in any kind of harsh weather. 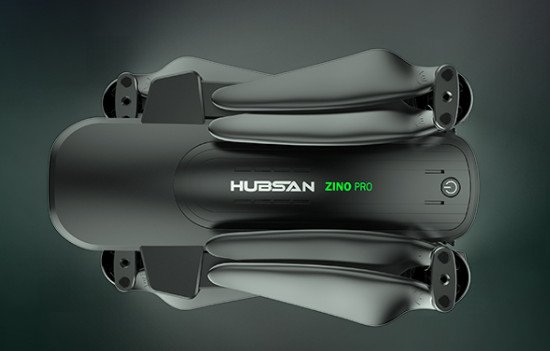 As you would expect from an advanced drone, the Zino Pro comes with powerful brushless motors that helps the drone fly better and gives it more thrust during take-off and also allows the drone to fly faster. In the case of this drone, it has a top speed 36 km/h which is fast for a non-racing drone.

The other benefits of brushless motors is that they are more efficient and powerful than brushed motors and last longer as well.

Like most modern drones, the Hubsan Zino Pro has some cool LED lights underneath each rotor, they serve a couple of purposes, you can use the LED lights to fly the drone at night, which makes for a stunning spectacle. Also. When you are calibrating the drone compass, something you must do before every flight, the lights will indicate when the compass is fully calibrated.

On the end of each rotor arm, there are small landing legs, these are there to mainly protect the camera and gimbal when you land the drone.

The drone is powered by an 11.4v 3000 mAh lipo battery, this is a modern-looking battery that fits in neatly into the back of the drone. It provides the Zino Pro with a flight time of around 20-23 minutes which is decent but a little disappointing as it’s the exact flight time as the original Zino and I thought they would have improved the flight time a little bit more.

The good thing is you get an extra battery so you can extend your flight time without having to wait for the battery to fully recharge which takes around 3 hours.

The remote controller is the same as the original Zino drone, it’s powered by an internal lipo battery that can be recharged via a USB cable (which is provided). It’s a simple-looking controller, nothing too flashy, which I actually prefer. There is a smartphone holder that pulls out from the bottom and real antennas on the top that will extend the transmission range. 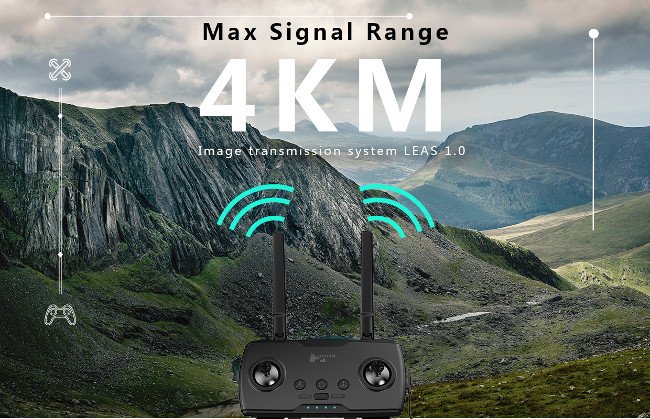 The control sticks are more responsive than the previous version. Its official transmission range is 4km, although, this number is sometimes exaggerated by drone companies so it may be a little less. Anyway, unless you are flying for commercial reasons, I don’t think anyone will fly the drone that far out, so its range is not a huge issue.

To make use of the drones FPV feature and smart flight modes, you will need to download the X-Hubsan 2 app. This is available on both Google Play and the Apple App Store. Unlike many other drone apps, the X-Hubsan 2 has a pretty decent rating on both marketplaces, it has been developed specifically for the Zino drone series and is updated on a regular basis which is a good sign as it means they are fixing bugs when it comes to their attention. I say this because some drone apps are not updated regularly despite a lot of complaints from customers about bugs within the app.

Do you want more options at a similar price point? Check out my list of the best drones under $500 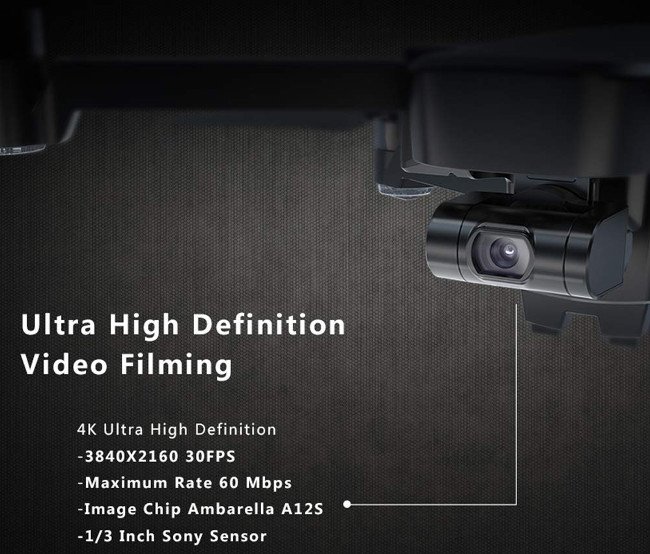 The main feature of this drone (or any drone for that matter) is its 4K camera. This is a professional-level camera that will allow you to take some stunning aerial videos and images.

If you have ever wanted to take those awesome slow-motion videos of nature, this is the kind of camera you will need. Usually, 4K camera drones used to cost around $1000 but not anymore, drones like the Hubsan Zino Pro have made 4K drones accessible to a lot more people.

The camera is stabilised by an advanced 3-axis gimbal that will eliminate any kind of shakiness, distortion or jello effect from your images and videos.

The camera has a wide-angle lens and with the 3-axis gimbal you can rotate the camera in multiple directions to get the angle you want. Also, if you are a professional photographer, you can attach ND filters on the lens to limit the amount of light that gets into your images. The filters are not included, so you will need to purchase them separately. Other features of this camera include recording 4K videos at 30fps or 2.7k videos at 60fps. It also comes with a Sony image sensor and an advanced video processing system on chip from Ambarella.

The live video feed is streamed in 1080p, for the best streaming quality, its best advised that you only fly in very good weather, otherwise, video streams may sometimes be cut-off.

Overall, this is a stunning camera, especially for the price the drone is selling for at the moment. If you are an aspiring photographer and want a 4K camera but do not have the budget for a DJI drone, the Hubsan Zino Pro is the next best thing. 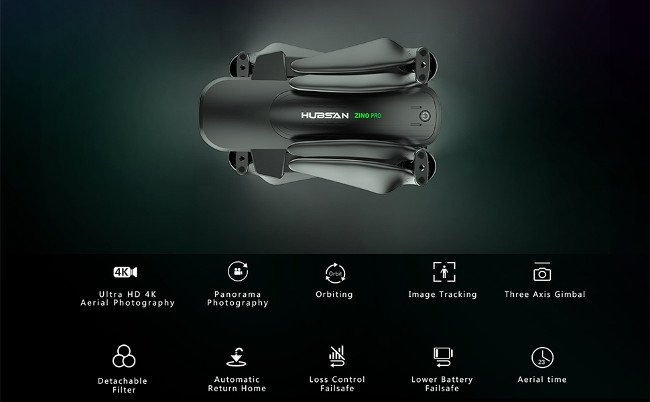 As you would expect from such an advanced drone, the Hubsan Zino Pro comes with many features that will enhance your flying experience.

These features include the following.

Dual GPS – It can connect to both GPS+GLONASS satellite systems for precise positioning on the app.

Image Tracking – You can lock onto a moving subject and the drone will follow it around. You can set the height and distance from within the app. This feature works really well, the only issue is that it does not comes with any kind of obstacle avoidance system, so you will have to be alert that there is no obstruction in its path.

Orbit Mode – In this mode, you can lock the drone on a specific target and the drone will orbit that position automatically.

Waypoint – A cool flight mode that will allow you to draw a path on the app and the drone will automatically fly along that route and come back to its flight of origin.

Automatic Return Home – This is a really useful feature as it will minimise the risks of losing the drone in mid-flight. You can manually activate this feature via the remote controller, or the app and it will activate automatically if you lose connection or if the battery gets low on charge.

With all the smart flight modes, you will still have control over the camera which will allow you to take better videos and images without having to worry about controlling the drone.

Hubsan have really impressed me with their Zino drones, the Hubsan Zino Pro, flies as you would expect from a premium level drone. Its smooth, isn’t very loud and is easy to operate, it also hovers very steadily which is always a bonus when you want to take images and videos. It holds up decently in windy conditions, although if you are relatively new to drones, I would recommend you only fly in good weather. The smart flight modes all work very well and the live streaming quality is very good as well.

If you are looking for an affordable 4K drone, the Hubsan Zino Pro is a very good choice. It’s one of the best drones with an HD camera that costs less than $500 and when compared to its more expensive competitors, it’s worth it. Click on the button below for more information and its current price.