The Visuo XS812 is a beginner-friendly drone that comes with an HD camera that can record videos and at 1080p and take images in 5MP. Its lightweight foldable drone that is very compact and easy to carry around, the drone comes with advanced features such as GPS, smart flight modes and an automatic return home feature. It has a flight time of around 10-15 minutes and costs just over $100.

Welcome to my review of the Visuo XS812 HD camera drone.

Are you looking for a cheap high-quality HD camera drone with some advanced features? A few years back, there were hardly any drones that fit the description above, however, now we are spoiled for choice.

Visuo are not a well-known name in the world of consumer drones, but they have released a few drones that have proven to be very popular. I have actually reviewed a couple of them, namely the Visuo Zen K1, which is probably their most advanced drone and the XS809HW which is their cheap beginner-friendly drone.

The Visuo XS812 was released near the end of 2018, so it has been out a while and has proven to be a very popular drone on Banggood where it has a 5-star rating and over 600 customer reviews.

One of the first things that got my attention about this drone is its colour scheme, its black and has nice gold patterns which is a different from a lot of the drones I have reviewed. It’s striking and looks good. 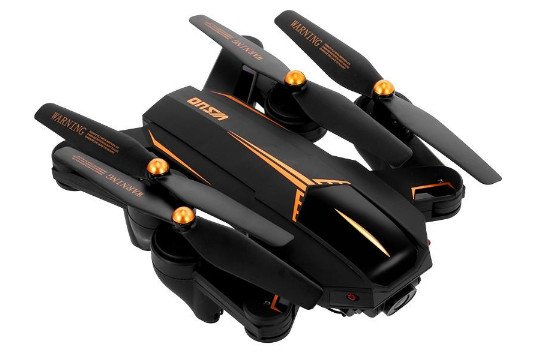 The Visuo XS812 is a medium-sized foldable drone (my favourite type of drone), it measures 33*33*6 cm when it is expanded and has sort of a flat design. It is a very lightweight drone, weighing around 200g (with the battery), this means that if you live in countries like the USA, UK and Canada, you will not need to register the drone.

If you live anywhere else, please do check what the rules and regulations are before you start flying any kind of drone.

It is a nice-looking drone and very compact in its folded form, this makes it easier to carry around and especially good to travel around with as it will not take up much space in your luggage.

The HD camera is on the nose of the drone and it can be manually adjusted 45°, more on the camera later but first I just want to mention a few other features about this drone.

Its propulsion system is powered by four brushed motors, brushed motors are not the most efficient and they will require a bit more attention when it comes to maintenance. However, they are one of the reasons why this drone is very cheap, and the drone does fly well, so it’s not that much of an issue.

The XS812 comes with dual GPS for better flight stability and more precise positioning, this is especially useful if you lose visual sight of the drone but can still see it on the drone app.

Underneath each rotor arm, there are big LED lights, these lights serve a couple of purposes, first, they allow you to fly the drone at night time (although if you are a beginner I would not advise this) and the LED lights also help to indicate when your drone compass is fully calibrated. 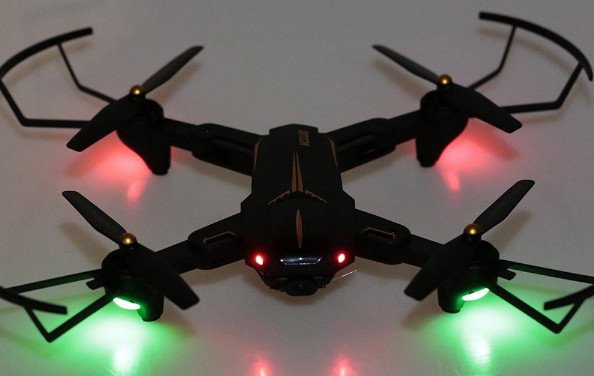 The drone is powered by a 3.85v 1800 mAh lipo battery that fits in neatly into the back of the drone. It’s a small battery and provides a flight time of around 12-15 minutes, which is pretty much standard for drones like the Visuo XS812.

Although it has a decent flight time, it’s not nearly enough to fully enjoy flying this drone, this is why I always advise people to purchase extra drones if they can. Charging the battery takes around 3 hours and you don’t really want to wait around that long just to fly the drone for 15 minutes. The good thing is that you do get the option to purchase an extra two or three batteries with the drone, which I highly recommend.

One last thing I want to briefly mention is the remote controller, I have seen a few good-looking drones that come with ugly controllers. This shouldn’t really matter as long as the controller works, but I prefer controllers that have the same aesthetics as the drone and fortunately this controller does. 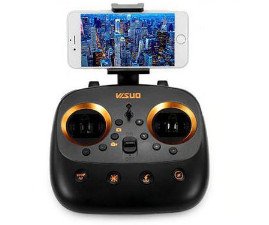 It is a large controller but not too big that it feels uncomfortable, the buttons are easily identified, and the control sticks are easy to manoeuvre. It has the same black and gold colour scheme as the drone which is cool and there is a separate smartphone holder that you attach on the back. The controller is powered by 4 AA batteries which, unfortunately, are not included with the package.

The app to use the FPV and other features is called the XSW UFO and it is compatible with both iOS and Android. It’s updated regularly and has an easy to navigate interface, from the reviews it looks like the iOS version has a better rating, so if you have an iPhone, the app will most likely work better on your device. 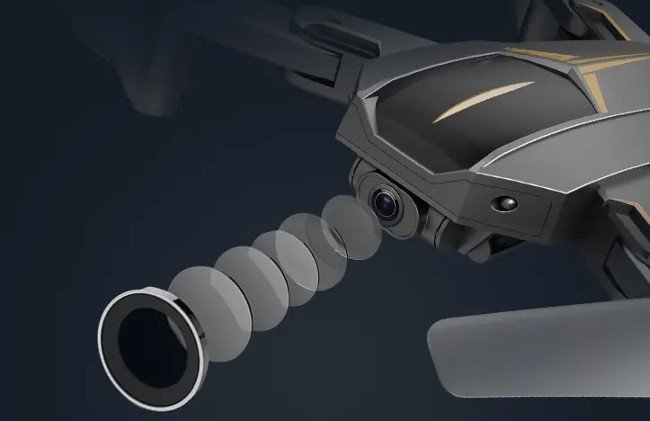 One of my favourite features of a drone is its camera and the Visuo XS812 comes with a decent one. It’s an HD 1080p camera that can be manually adjusted 45° for better viewing angles, although it would have been more convenient if you could do this via the remote controller.

It has 120° FOV which is pretty wide and will capture more details and a decent 5MP sensor for high-quality images. You can stream live to your smartphone, it’s not the greatest quality but for a drone that costs just a little over $100, it’s alright.

The transmission range for FPV is around 90 meters on a good clear day, so if you keep well-within this distance, the video quality should be clear.

The camera does have an SD card slot but it’s not the most accessible, you will need to break off a small piece of plastic to access it. It’s not the best design aspect of this drone but it does give you the option to record your videos and images on to a micro SD card an upload them on another device.

The quality of the camera overall is good considering the price it currently costs the purchase this drone.

Despite being a relatively cheap drone, it does come with some cool features that will make it more and easier to fly.

Orbit Mode– Press a button on the controller and the drone will orbit your position automatically, this mode sometimes does not work as it should.

Way Point – In this smart flight mode, you will be able to draw a flight path on the drone app and the drone will follow that path and return home.

Follow Me – Pretty self-explanatory, in this flight mode, the drone will lock onto your smartphone and follow you wherever you go.

6- Axis Gyroscope – This will help with flight stabilisation and allow the drone to hover more accurately.

3D Flips – The drone will flip 360° at the push of a button, not really necessary but impressive to watch.

One-Key Return – This feature can be activated via the remote controller or the app, just push the return home button and the drone will come back automatically. This will minimise the risks of losing the drone in mid-flight.

The drone fly’s surprisingly well, its hovering capability is impressive and holds up relatively well even if there is some slight wind. Although I would not advise anyone, especially beginners to fly such a lightweight drone in windy conditions or any kind of bad weather. The transmission range is around 200 meters on a clear day, however, you should take these official figures with a pinch of salt as drone companies sometimes overstate them.

Overall, I am impressed by the Visuo XS812 drone, its cheap and comes with a decent camera and some really good features, I especially like the smart flight modes. It’s suitable for everyone and is a good choice for a first drone, however, if you want something different at a similar price point, I highly recommend the DJI Tello, which I believe to be the best beginner-friendly drone on the market. It comes with a better camera, more features, a superior app and the full support of DJI. Click here to learn more about the DJI Tello drone or click on the button below for more information on the Visuo XS812 and its current price.